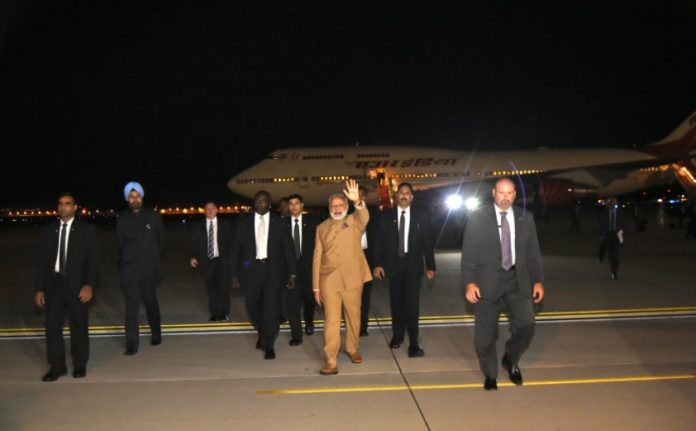 Prime Minister Narendra Modi is no stranger to Washington D.C. As the head of the Indian Government, this is his fourth visit to the American capital.

Air India One touched down at the Andrews Air Force base, the equivalent of the Palam technical area in New Delhi, at 9 p.m. (local time) to a warm welcome by expat Indians waving flags and the customary “Modi Modi Modi Modi” chant. 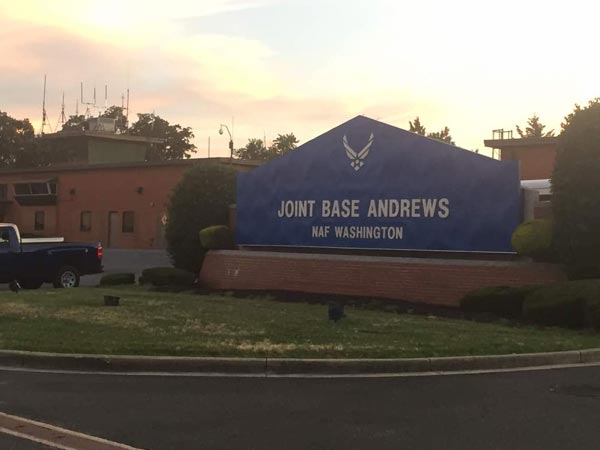 The Prime Minister was received by the Indian Ambassador to the US, Navtej Sarna, and his wife, Aveena.

“We are here to welcome the Prime Minister. We will be delighted to meet him,” said an expat, just before the arrival of Prime Minister Modi.

“We expect a lot from Prime Minister Modi. We think he is a great leader. So I came to see and meet him,” said another.

The Andrews Air Force base is located a few miles south east of Washington D.C. and is the home of the 89th Airlift (AMC) and parking spot for the U.S. Presidential Aircraft, Air Force One. Indian Prime Ministers like other heads of state and government are received at this airport.

Americans have bitter sweet memories of the Andrews Air Force base.

It was at this airport on November 22, 1963 that the body of one of the most loved of American Presidents, John F. Kennedy, arrived after he was shot dead in Dallas, Texas. Thousands of people had gathered to witness the lowering down of the coffin of their beloved president, accompanied by a grieving Jacqueline Kennedy.

It was at this airport in 1981 that U.S. hostages arrived from Tehran, Iran, marking the end of President Carter’s tenure and the dawn of the Reagan era.

Indian Prime Ministers and Presidents have arrived here since the 1960’s though the commercial National Airport in the heart of the city is more conveniently located.

A frequent flier, the Prime Minister flew in after a full day of events in Portugal.

Having made 62 trips to 46 countries in the past three years of his tenure, the Prime Minister never betrays signs of reducing the pace of his travels or appointments during his visits.

He was here in D.C. in September 2014 a few months after taking oath as India’s 14th Prime Minister. That visit was all about getting to know President Obama.

Both were considered outsiders in their respective country capitals, but President Obama had made himself comfortable in Washington D.C. in his second term by the time Modi arrived. The 2014 visit however will be remembered for the historic Madison Square Garden event in New York where thousands thronged to see and hear the Modi phenomenon. The American capital was overshadowed. The one thing that stood out though was President Obama and Prime Minister Modi at the Martin Luther King memorial which the Washington Post reported as “a touch of diplomatic poetry”.

In 2015, Prime Minister Modi skipped D.C., but went to New York and San Fransico. The ‘jadu ki jhappi’ with Facebook founder Mark Zuckerberg and rocking the Silicon Valley with an all out push for Digital India made a powerful impact on the West Coast.

But Prime Minister Modi is not doing a repeat of that destination in 2017, what with the H-1B visa paranoia that has gripped the expat Indian community.

America was in the thick of a contentious election campaign, President Obama was completing his final term in office and there was little hope for any major changes to the relationship or shift in approaches. But Prime Minister Modi visited the American capital in March 2016 for the Nuclear Security Summit and then again for two days in June for a state visit.

By now President Obama and Prime Minister Modi had struck a personal rapport built over several meetings at various international summits around the globe. June 2016 was an au revouir or ‘phir milenge kabhi’ by the Indian Prime Minister to Barack Obama. The two are not scheduled to meet in the two days that Prime Minister Modi will be in D.C.

The Prime Minister received a warm welcome from the President of the United States, Donald Trump earlier today when he Tweeted welcoming Modi and calling him a ‘True Firend’,

Look forward to welcoming India’s PM Modi to @WhiteHouse on Monday. Important strategic issues to discuss with a true friend!

To which Modi replied soon after landing,

Thank you @POTUS for the warm personal welcome. Greatly look forward to my meeting and discussions with you @realDonaldTrump. https://t.co/lOfxlLI7v0

Prime Minister Modi will be staying at the Waldorf Astoria, the preffered hotel of all Indian Prime Ministers. It is located just two blocks from the White House and a few blocks from the Capitol Hill, making it convenient for dignitaries to hop in and out for meetings without disrupting traffic during ‘movements’.

The ornate hotel traces its history to 1816, but was rebuilt and refurbished several times. Martin Luther King is said to have written his famous ‘I have a dream’ speech here.

The Willard is famous for its bar, the Round Robin, which is frequented by lobbyists and literary giants including heads of state and government. Strike Prime Minister Modi out of that list. Or for that matter former prime ministers Dr. Manmohan Singh and Atal Behari Vajpayee, both of who have stayed at this hotel.

The Indian Embassy sets up a media room in the hotel when the Prime Minister visits this city. Press briefings are held here by the Ambassador, Foreign Secretary and on one occasion was held by Prime Minister Dr. Manmohan Singh.