ALSO READ: Study says it is beneficial for your child to count on fingers

Martha was rescued when she was nearly blind by Dogwood Animal Rescue Project in Sonoma Country. She underwent several surgeries before contesting in the competition. 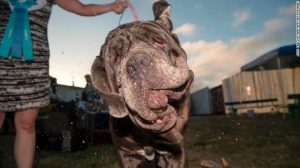 Martha beat various breeds of dogs and won against 13 others to claim the title. Martha won $1500 and a shiny trophy in the event.

Some people argued that Martha was so ugly that she is beautiful and her drooling face looks like love at first sight. Dog lovers also argued about the existence of such competitions as they cannot tag any dog as ugly.