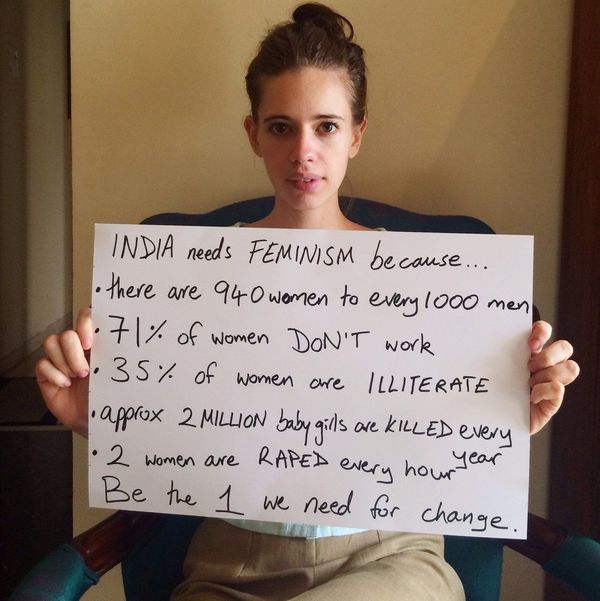 Feminism is a controversial word that most celebrities, male or female tend to brush away or refuse to be associated with. However, Kalki Koechlin as usual stands out. When asked about feminism, she said – “”I am a feminist, because I’m a human.” Kalki is the feminist celeb India is in dire need of and we cannot stop gushing! She points what everyone fails to comprehend that feminism is merely equality.

Her slam-poetry, monologues, interviews always serve as a reminder that despite the misogynist structure of the movie industry, all is not yet lost. Her monologue titled ‘Wo-Manologue’ made hard-hitting statements that revealed the glaring inequalities of the society we live in.

And her most recent undertaking – ‘Noise’- in collaboration with Blush has taken the internet by storm! The slam poem does not focus on a single topic, but is more of a mixed bag that addresses myriad issues. It forces you to listen, not just hear. The poem serves to broaden horizons, not limiting itself to a certain category. Written for world music day, ‘Noise’ doesn’t serve a singular defined purpose, but instead the collective impact of the poem, the music, the complexity of the cacophony takes you on an intense emotional roller coaster ride. In the process, exposing the obvious hypocrisies of a ‘secular’ India, that bans

“Feminism talks about an egalitarian society, all humans are equal, irrespective of their gender. That’s the only thing I want to put across. But we are still far from it. The gaze to view things around is still very male,” Kalki said. The actress who was last seen in Konkona Sen Sharma’ directorial debut – A Death in the Gunj, has never hesitated to speak up for women’s rights and embrace her role as a celebrity who can make significant contributions in this arena. Her stance on LBGTQ rights, fairness creams, censorships have set the bar and we hope other celebs will follow suit.