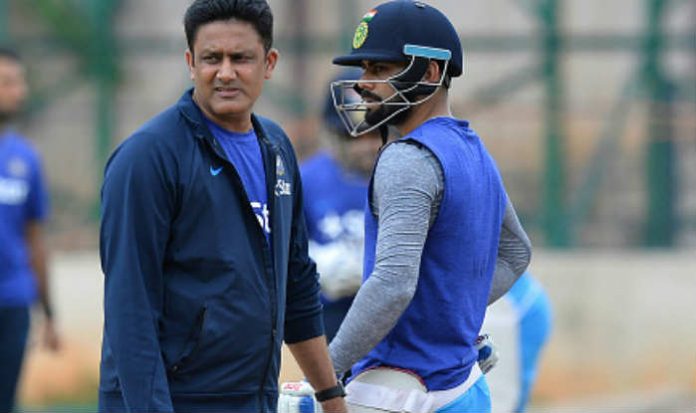 India’s cricket coach Anil Kumble took on Twitter to express his feelings and his rationale behind quitting as the position of Head Coach on Tuesday. The speculations of a spat between Kumble and Indian skipper proves to be true and it has been clearly mentioned as the reason behind his anticipated decision. He was glad that CAC (Cricket Advisory Committee) wanted to continue him as the Head Coach of Indian cricket team, however, his decision has come mainly due to his differences with Virat Kohli.

He mentioned that, though BCCI tried to clear the misunderstandings between him and Virat Kohli, it is not possible to build the coach and captain partnership between them.

He stressed on saying that “Captain had reservations with my ‘style'”

Anil Kumble decided not to accompany Indian team to the West Indies Tour for the limited overs series starting June 23, citing the reason as a commitment to an ICC meeting. However, he has penned down his resignation to the CEO of BCCI, according to the reports.

The ongoing rift between current Indian captain Virat Kohli and Anil Kumble was already in the air and it was perceived that the meeting between the BCCI and Virat Kohli could end with Anil Kumble’s resignation.

Speculations of the tussle between Indian skipper Kohli and Anil Kumble was circulating after BCCI threw open position for electing Indian coach.

BCCI‘s decision of not renewing the one-year contract of Kumble as an Indian coach was also directing towards the selection of new coach. Special Rai committee assigned by Supreme Court to check the situation of Indian Cricket Team denied any spat between Anil Kumble and Virat Kohli, however, the captain and coach were hardly seen talking during the Champions Trophy T20.

Former Indian ace players like Saurav Ganguly, Tendulkar and VVS Laxman have been assigned for the hunt of a new coach for the Indian team.

Kumble’s stint as a coach was proved to be very beneficial to Indian Team in tests as India won 13 out of 17 tests during his tenure while losing just one match. Kumble’s reason for resigning could possibly be only due to bad repo with Indian skipper.