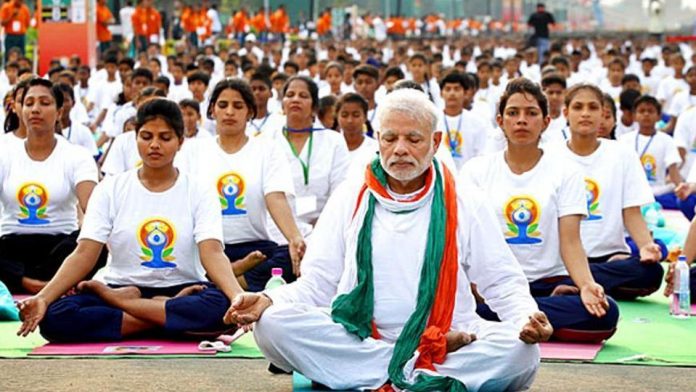 For International Yoga Day 2017, Baba Ramdev has taken upon himself the challenge of setting a Guinness World record for the highest number of people performing yoga at a location.

After speaking on the importance of yoga in Lucknow, Prime Minister Narendra Modi performed asanas at Ambedkar Sabha Sthal to kick off the UN recognised day. Prime Minister along with Uttar Pradesh Chief Minister Yogi Adityanath enthused around 55,000 people at the event.

PM Shri @narendramodi participates in the mass yoga demonstration on the occasion of #InternationalYogaDay in Lucknow, Uttar Pradesh. pic.twitter.com/c6LyqJaNoc

In Ahmedabad, yoga guru Baba Ramdev is celebrating the day,expecting over four lakh people to join him throughout the day. He was joined by BJP president Amit Shah and Gujarat Chief Minister Vijay Rupani. At this location, he aims to set a Guinness World record for the highest number of people performing yoga at a location.

All over India from Mumbai to Chattisgarh, politicians and the common people regardless of political affiliations, faith and other social divides have come together to partake in International Yoga Day 2017.

Sharing some more glimpses from #InternationalYogaDay at Mumbai #YogaDay2017 pic.twitter.com/bAAWS1VBcG

#InternationalYogaDay2017 celebrated by 44 ITBP with locals and schoolchildren in Chhattishgarh#himveer pic.twitter.com/pm6d45W5q9

International Yoga Day is being celebrated not just in India, but all over the world starting from Japan to South Africa.

Yoga being performed at the Japanese Parliament.

Celebration of #IDY2017 at Cancun (Mexico) with much excitement on beachfront in presence of Tourism Secy @MukteshPardeshi @IndianDiplomacy pic.twitter.com/bar56OIGkr

Even the UN headquarter were lit up to commemorate Yoga Day celebrations.

The United Nations declared June 21 as the International Yoga Day on December 11, 2014.