Neither intimidated nor arrogant: Kohli ahead of Ind vs Pak final | Newsmobile
Tuesday, December 6, 2022

Home Sports Cricket Neither intimidated nor arrogant: Kohli ahead of Ind vs Pak final 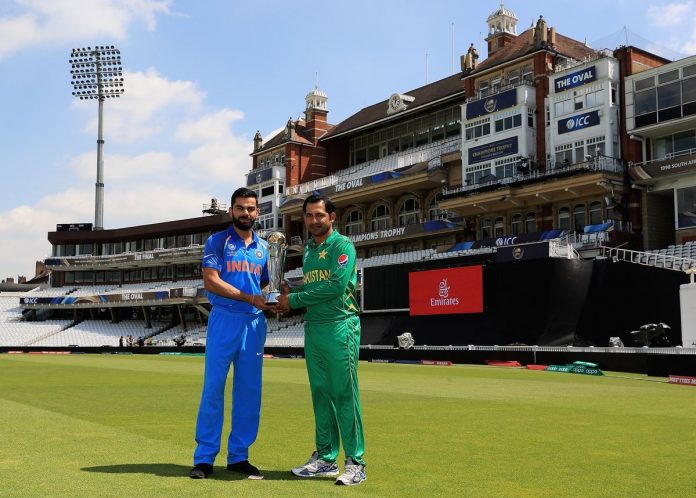 Assuring that India will be neither intimidated nor arrogant when they face Pakistan today for Champions Trophy final, the Indian skipper, Virat Kohli asserted that there were no favorites in the much-awaited clash.

If the defending champions beat Pakistan today, then they will become the No. 1 ODI team by knocking South Africa off the top spot.

Speaking on the eve of the encounter which is expected to draw in 300 million television viewers in India alone, Kohli remained wary of his side’s status as favorites.

“I don’t see any relevance of the first game – you can never tell how a particular team starts a tournament. Some teams start confidently and then they fade. Some teams might not have the best start but they come back amazingly – which Pakistan have done. Everyone is aware of the talent they have – they can beat any side in the world. At the same time, neither are we too intimidated nor too arrogant about what we are doing. It’s important to maintain the balance of being confident in your own skill and what you are doing as a team,” he said on a sensible note.

The Indian team, considered to be one of the favorites to defend the title, have played to their potential in all the games till now, except the one against Sri Lanka, who surprised the Men in Blue in the group stage.

Pakistan, on the other hand, have also lived up to their “unpredictable” standards, with their comprehensive wins over South Africa and Sri Lanka after the first game debacle against Kohli & Co.

On Wednesday they knocked out the previously unbeaten tournament hosts England out of the competition with a comprehensive eight-wicket win in Cardiff.

Which is why, the 28-year-old India skipper said he was hoping for a very well contested Champions Trophy final.

“Both teams obviously want to win the final. They have worked very hard to stand where they are in the final and I’m sure all the players will come out and give their best,” he said.

When asked about the preparation and the team’s approach about the much-hyped match, Kohli said, “We have not spoken about the game in any different way. We have practiced the same way as we started the day we came here. Even today’s practice was no different. There wasn’t any drop of intensity or something extra. There was no over excitement. People were just doing the normal things that they do in any practice session and that’s the kind of approach we have following throughout the tournament.”

“As I said last time, it’s just another game of cricket. Whatever the result, we have to go forward and play more games. So, the more relaxed you stay in these kinds of situations, it helps you take better decisions. We have changed nothing from the day we came here,” he added.

Kohli also indicated that he would not be making any change in the Playing XI and would go with the same team that played against Bangladesh in the semi-finals.

The Men in Blue have won all three of their previous matches against Pakistan in the knockout stages of International Cricket Council (ICC) tournaments to date and it is but obvious that they would start going into the finals as favorites.

However, the Indian skipper said they were not looking at past records and would rather focus on putting up a complete performance in the summit showdown.

“As a team, we want to win. We don’t want to look at the stats and the history. We don’t focus too much on records,” he said.

Meanwhile, Pakistan coach Mickey Arthur believes his team has got no other option but to attack the Indian batters in order to give themselves the best possible chance to win.

According to Arthur, India’s top-order has done marvelously well and the middle-order has not been tested throughout the competition, so if Pakistan want to create a chance for themselves, they’ll have to focus their attack on Rohit Sharma, Shikhar Dhawan and Virat Kohli who have been scoring the bulk of the runs for the Men in Blue.

“That middle order haven’t had massive hits, they haven’t batted much under pressure of late. So we’ve got to try and put them under extreme pressure particularly by knocking their top order over,” he added.

The Pakistan coach believes that if they can do that, they have got a real chance of getting to India’s underbelly.

This will be the fifth time India and Pakistan will have a face off in the Champions Trophy; the record is currently balanced with two victories apiece.