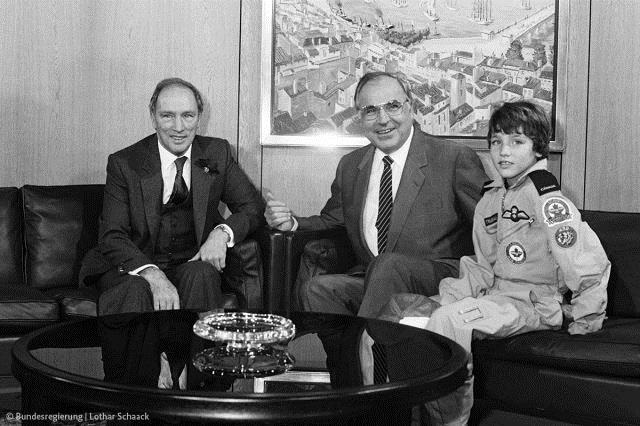 The Canadian Prime Minister, Justin Trudeau did it again. To condole the demise of ex-German Chancellor, Helmut Kohl yesterday, he shared an old black and white photograph of the Chancellor with his late father, the then Prime Minister of Canada, Pierre Trudeau. The picture also has him sitting with the late Chancellor and his father dressed in what looks like a spacesuit.

It is accompanied with the message, “Memories of Helmut Kohl, 1982. Canada sends its deep condolences to the German people on the passing of a visionary leader for reunification”

Kohl’s 16-year tenure was the longest of any German Chancellor since Otto von Bismarck. Kohl oversaw the end of the Cold War and is widely regarded as the mastermind of German reunification.

Probably shared as a sweet memory of a political stalwart recognized as a historic leader who changed the world as we know it today, the picture drew diverse responses.

Many Twitteratis who love to gush over anything Trudeau says on the micro-blogging site went all mushy while others said “how is everything about you?” and called his father a “Communist lover”.

The picture though has garnered thousands of likes and re-tweets.

Memories of Helmut Kohl, 1982. Canada sends its deep condolences to the German people on the passing of a visionary leader for reunification pic.twitter.com/hGwL04BxeA

Here are some of the funniest reactions over a young Trudeau’s choice of dress for the meeting,

dude you gotta wear that spacesuit in parliament sometime

Who’s the dork in the flight suit?

You were only knee high to a grasshopper back then.

The charismatic Canadian politician sure know how to stay in the news.