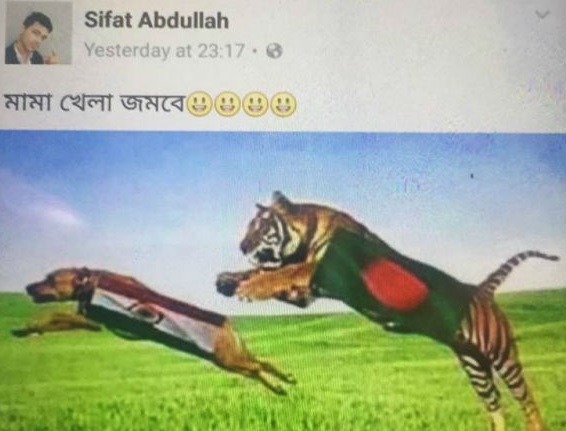 India and Bangladesh have played well in Champions Trophy 2017 to make their way to the Semi-Finals, which is to be held on June 15th. The stage is set for both the teams to prove their mettle. Meanwhile, Bangladesh fan has once again tried to insult Indian cricket by posting a derogatory picture of a dog draped in Indian tricolour flag which is been hunted by a Tiger with draping Bangladesh’s flag.

This is not the first time Bangladesh Cricket fans are doing something like this. Earlier a controversial photoshopped picture of Bangladesh bowler, Taskin Ahmed was seen holding severed head of MS Dhoni during 2016 T20 World Cup. 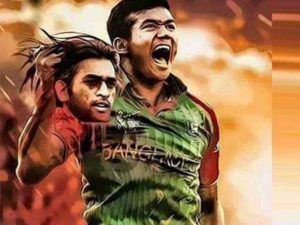 Bangladesh cricket fans over enthusiasm about cricket have gone too far in the past as well. A weekly newspaper of Bangladesh “Prothom Alo” published an insulting picture of Indian cricketers with their half head shaved in 2015.
Apart from circulating objectionable pictures, Bangladesh fans are also accused in several incidents of physical assaults against Indian fans and India’s hardcore fan Sudhir Gautam in Sher-e-Bangla stadium Bangladesh.

Photoshops are one different way of insulting, when it comes to performance, India and Bangladesh have never encountered each other in Champions trophy, but India has defeated Bangladesh four out of Five times in ICC Events.