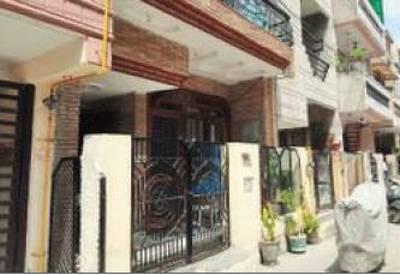 NEW DELHI: An aged couple in Rohini were left shell-shocked when the two helmeted robbers who attacked them in their house on Saturday afternoon were caught and their identities were revealed.
As they were trying to escape after the 80-year-old house owner dispossessed them of their weapon and raised an alarm, the two boys were caught by neighbours. When their helmets were removed, one of the thieves turned out to be the grandson of the couple.
Rajat (21) knew that his grandfather, Ram Lal Miglani, had recently sold a property for Rs 50 lakh and kept the money in his house in H Block of Rohini Sector 7. The law student persuaded one of his friends, Rishabh, a 22-year-old medical student, to help him in an reckless plan to rob his own grandparents.

On Saturday afternoon, Miglani, a retired manager of a private firm, was overseeing some electrical repairs and accidentally left the house entrance open. This was the window of opportunity the youths were looking for, and they quickly entered the house with a toy pistol and a hammer, their faces hidden by helmets.

ALSO READ: WB: GJM calls for an all party meet in Darjeeling
Miglani’s wife, 70-year-old Shakuntala, was cleaning the bedroom, when the youths attacked her with the hammer, smashing her teeth in the process. Miglani heard her feeble calls for help and ran to the bedroom. There he saw two boys holding his wife at gunpoint.

After they asked Miglani to hand over the keys to the locker, the 80-year-old bent down as if to pick something up. Instead, he striked  hard at the hand of the youth holding the pistol. As the robber dropped the weapon, Miglani raised an alarm. The security guard and a few neighbours heard the calls, and their approach panicked the intruders, who tried to make a run for freedom.

“One of the youths got on a white scooter and tried to ride away, but I was able to pin him to the ground,” said Raghuraj Singh. The second youth, meanwhile, frantically tried to climb over another gate, but was apprehended.

The pair were first beaten up and then tied to the gate. When the crowd removed the helmets, Miglani was shocked to see that one of the men was Rajat, their own grandson.

“The grandson started pleading to his grandfather to prevent the people from beating him,” said Chhanda, a household help who assisted the security guard in grabbing Rajat.

The cops were duly informed, while Shakuntala was admitted to Dr Baba Saheb Ambedkar Hospital in Rohini for treatment. Rajat and Rishabh told police that they needed money for their travel plans. Police have registered a case of trespassing and assault against them.