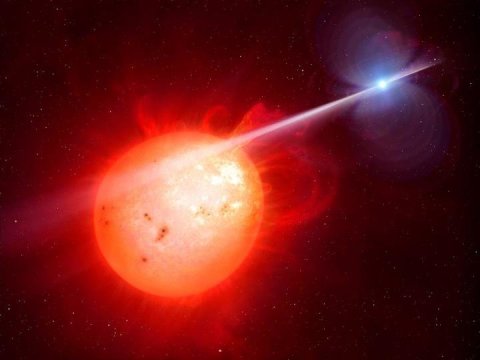 Using five different ground-based telescopes across three continents, the team concluded that the failed star that makes up this binary system has a mass of about 6.7% of that of the Sun which is equivalent to 67 Jupiter masses. The white dwarf has a mass of about 40% of the Sun’s mass. They have also found out that the white dwarf will begin cannibalizing the brown dwarf in less than 250 million years. This makes this binary the shortest – period-pre-cataclysmic variable ever to have been discovered.

ALSO READ: Assam handloom products soon to be marketed globally
The hot white dwarf star was believed to be an isolated star as identified by SDSS before it was announced by Dr. Lorne Nelson of Bishop’s University at the semi-annual meeting of the American Astronomical Society in Austin, TX that was held on June 6th.

The attention of Dr. Saul Rappaport and Andrew Vanderburg was caught by an observation when they were analyzing the light curves of more than 28.000 K2 targets. They noticed that one of the light curves showed reasonably deep and broad eclipses that are thought to be due to an illumination of the cool component by the much hotter white dwarf. Without wasting a moment the team quickly devised a model for the binary showing that it was consistent with a hot white dwarf that is composed of helium being eclipsed by a much cooler and lower-mass brown-dwarf companion that is seen nearly edge-on.

ALSO READ: A concert driven by emotions: One Love Manchester

But there was still a question that had to be answered. As Lorne Nelson said, “We had constructed a robust model but we still had to address the ‘big picture’ issues such as how this system formed and what would be its ultimate fate.’’ The team used sophisticated computer models, in order to answer this question, to stimulate the formation and evolution of WD1202.

According to this scenario, the primordial binary consisted of a brown star and an ordinary 1.25 solar mass star that were in a 150 orbit with each other. The star became red, giant and engulfed its brown star companion on aging. Nelson explained, “It I similar to an egg- beater effect. The brown dwarf spirals in towards the center of the red giant to be lifted off of a core and to be expelled. The result is a brown dwarf in an extraordinary tight, short period orbit with the hot helium core of the giant. That core then cools and becomes the white dwarf that we observe today.”

According to their calculations the primordial binary was formed 3 billion years ago and the common envelope phase has occurred recently about 50 million years ago. So this leads to a question that is what will happen in the future? The team believes that the emission of the gravitational waves will deplete the orbital energy of the binary so that the separation between the two stars will be so small that the brown dwarf will start to be cannibalized by its white dwarf companion. When this happens, the binary system will exhibit all the characteristics of a cataclysmic variable (CV). For this reason the team says that WD1202 can be referred to as the shortest pre-CV period ever discovered.