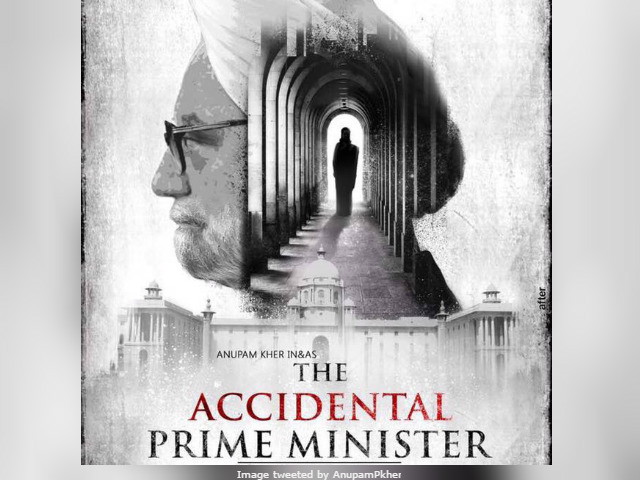 A book that debuted with a splash in 2014 the year of the game-changing general elections in India is again making waves today with heated discussions on its movie adaptation on the Social Media.

Not only is the time of its release, October 2018, a few months ahead of the next general elections a reason for raised eyebrows but, also its casting is causing tongues to wag and jaws to hang open in disbelief.

Sanjay Baru‘s, The Accidental Prime Minister is back in news once more and it’s probably going to be the beleaguered Congress Party‘s worst pre-poll public relations nightmare this time around.

In the movie adaptation of Sanjay Baru’s personal memoirs of his years at the PMO, the actor playing the former Prime Minister, Congress leader Manmohan Singh, is none other than, Anupam Kher whose wife, Kirron Kher, is a member of the ruling Bharatiya Janata Party and a sitting MP of the party in Lok Sabha. Kher is also a well-known BJP loyalist apart from being a noted actor with an enviable body of work behind him. An artist can always say that his art has nothing to do with his political leanings and that could be absolutely true or not.

No wonder then that the tongues are wagging on both sides and #TheAccidentalPrimeMinister has been trending non-stop for two days now.

Anupam Kher Tweeted the first look this morning. The poster shows Kher as Singh looking out in a grey world with what looks like a silhouette of Sonia Gandhi walking what looks like the corridors of power.

To reinvent yourself as an actor is to challenge yourself. Looking forward to portraying #DrManmohanSingh in #TheAccidentalPrimeMinister.:) pic.twitter.com/PsVdkpjZWY

The resemblances are uncanny and the intent very clear. The poster makes no bones about hiding the content or the intent of the book – significant power was wielded by the Congress party’s president Sonia Gandhi, to whom Singh was completely “subservient”.

Baru was Prime Minister, Manmohan Singh’s Media Advisor between May 2004 to August 2008. This was during the first tenure of the UPA government – a complex mix of political parties from regional to Communist that was stitched together by the Congress to form a government.

The book was written as a personal memoir and was never either discussed or signed-off by either Singh, PMO or the Congress Party.

According to the book, the parties that together made the UPA were full of stalwarts who were big names in their region and even had completely opposite views on each other’s politics. Most did not see eye-to-eye and were always threatening to pull out if their demands were not met with.

It paints Manmohan Singh as a leader who was he was the most acceptable candidate for the prime ministerial position once Sonia Gandhi decided to pull out from taking the reigns post election victory. It is believed that she did this following the controversy created by the opposition over her being an Italian.

However, it alleges that Singh as the PM did not have complete authority to take decisions. He is shown as being subservient to Sonia who was the person taking all the significant decisions including the choice of Cabinet Ministers without consultations with the PM.

Incidentally, Baru makes it absolutely clear in the book’s Introduction that it was – “The Book I Chose to Write”. He also ends the same Introduction chapter by saying, “Finally, I have not shared the contents of this book with Dr Singh prior to its publication. Indeed, he may not approve of many of my observations in these pages and may even disapprove of my decision to write this book.”

With these remarks he had opened the doors to the alleged secret world of the PMO and presented his ex-boss the PM of India as an erudite human and as a politician with his hands tied behind his back.

Many eyebrows were raised at the time of the book’s release in 2014 – the big election year. It was a year when both UPA and the Congress Party were hounded by myriad scams from 2G, Commonwealth Games to Coalgate – where Singh was himself under the scanner and given a clean chit by the Supreme Court only a few weeks back.

The book added a large if not the last straw to the PR nightmare it was facing at the time by outing Sonia Gandhi as a “puppet master” to Manmohan Singh’s “PM”.

The book was published by Penguin and the PMO released the statement saying, “It is an attempt to misuse a privileged position and access to high office to gain credibility and to apparently exploit it for commercial gain. The commentary smacks of fiction and colored views of a former adviser.”

The book clearly describes ‘dysfunction’ in leadership that led to wide-ranging political ramifications leading BJP leaders to pose a series of questions to Singh and Sonia Gandhi on the basis of the revelations mentioned in the book: “Did the PM refuse to take daily briefings from intelligence agencies and did this not have a bearing on our security situation? Did the PM forfeit his prerogative to decide on who would be in his cabinet? Was the ‘2G fame’ A Raja appointed at the behest of Sonia Gandhi? Did the PM knowingly overlook corruption by his colleagues as alleged in the book. Did 2G, CWG and Coalgate happened because of this?”

During the campaingn, BJP also promised “We will not give an accidental Prime Minister to this country.”

If the book, written in English became a bestseller that flew off the shelves in 2014 riding on the election controversy that was accessible only to the elite English-reading public could cause such a furor, imagine the reach of a Hindi film with a well-known movie star at the helm.

The Accidental Prime Minister, with an all revealing sub-title, The Making and Unmaking of Manmohan Singh though was supposed to be – according to the author in an interview to a national daily – “positive [about the PM].” He maintained that he wrote it mainly because Singh “has become an object of ridicule, not admiration. I am showing him as a human being, I want there to be empathy for him.”

Though it went on to portray the struggles of a man struggling to stay aloft in the most powerful position in the country without any power to take decisions. It even shows that not only were the leaders of the coalition indifferent to him and going straight to Sonia with their ‘issues’ but, also party colleagues not treating him with the respect deserved by the PM. Some allegedly like Pranab Mukherjee and Natwar Singh even treating him with contempt or sneer.

The stage is being set for a bitter winter of 2018 for the Congress Party that is trying its level best to make a comeback against a massive BJP wave.

The buzz on the Internet today though was mainly on one point – Manmohan Singh who is well-known for his reticence that won him the moniker, ‘Manmoun Singh’ or the one who never speaks, may not allow Kher enough chance to exercise theatrics through dramatic dialogues in the film.

Will there be dialogues in #TheAccidentalPrimeMinister?

why need an actor when all he has to do is stand and say nothing.. MMS could have played the part himself #TheAccidentalPrimeMinister

In reality, it could actually act as coup de grâce for the grand old party struggling to keep its nose out of water.