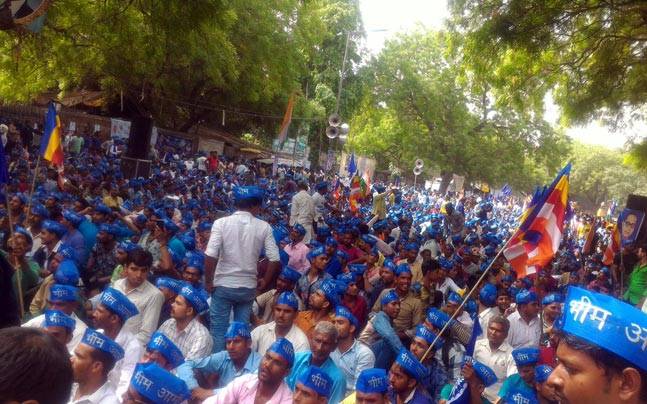 The development comes after the recent violence involving Dalits and Thakurs in Saharanpur during the birth anniversary celebrations of B. R. Ambedkar.

The Dalit protesters are demanding justice from Uttar Pradesh Chief Minister, Yogi Adityanath. They also alleged that the Uttar Pradesh government was mistreating the Dalits.

“We have no expectation from the government. So many people are in the hospitals not even a person has come there. This government is against the Dalits. We need justice and justice for the people who are lying in the hospitals,” said a protestor.

The Delhi Police yesterday denied permission for a demonstration by several Dalit unions. The unions had told police that they expected a gathering of over 50,000 people, which prompted police to deny permission.

The issue dates back to May 5, when a mob from the Thakur community allegedly burned and ransacked 25 houses belonging to Dalits, and injured 15 members from the community, in Saharanpur.

Earlier that day, a group of Thakur men wanted to take out a musical procession honouring Maharana Pratap, which had been opposed by Dalits citing lack of permission from authorities.