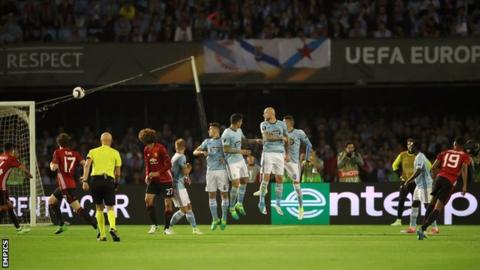 Vigo [Spain], May 5: Manchester United striker Marcus Rashford‘s superb free-kick in the second half helped his side beat Celta Vigo 1-0 at Balaidos to gain the upper hand in their Europa League semi-final tie on Thursday.

In-form Rashford, who also scored a dramatic extra-time winner against Anderlecht in the quarter-finals, scored a bending a free-kick into the corner in the 67th minute to ensure United take an away goal and a massive advantage going back to Old Trafford in a week’s time for the semi-final second leg, reports the media.

With the Jose Mourinho’s side outside the Premier League’s top four, the Europa League perhaps represents their best chance of earning a place in next season’s Champions League.

United next take on Arsenal in their Premier League clash on Sunday, while Celta will lock horn with Malaga on the same day.