No words would be enough to praise Rajamouli ‘s vision that created this grandiose magnum opus.

The story’s missing part was as gripping as we craved.The larger than life characters, the costumes ,the accessories,the grandeur of the sets, the scenes,the stunts and as an icing on the cake , the amazing background score (M.M Keeravani) ensures that the adrenaline level never goes down.

This part begins with the early life of Amarendra Baahubali (the senior) , his love life and how he falls prey to treacherous schemes. There’s an ample amount of humorous touch added this time and you get to see a different aspect to Katappa. The part ends with how Mahendra Baahubali ( the junior) finally avenges.

ALSO READ: All you need to know about Baahubali 2

Ramya and Rana Dagubatti are as impressive in their performances as in part 1. Dagubatti works wonders with his facial expressions and physique when it comes to conveying menace. 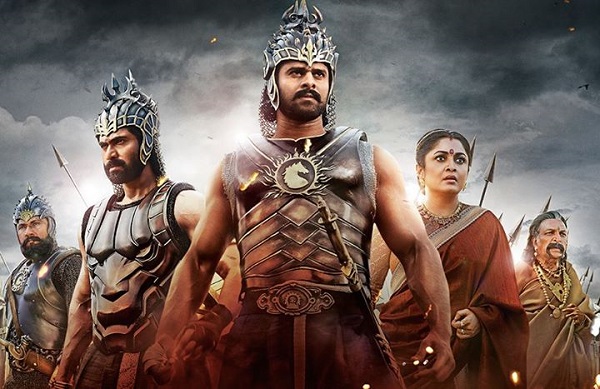 Prabhas’s character is very larger than life and every hero’s dream I guess. Everything about him has been schemed to vow us, right from his postures to his stunts and the character is so worth reverence and adoration that you actually feel sad along with the subjects of Maaheshmati . Such is the beauty of the screenplay ( by Rajamouli )..And of course the story ( Vijyendra Prasad ) deserves a lot of credit.

Never mind that the stunts are absolutely gravity and logic defying, all that matters is that they could make you hoot and clap.

The dialogues are sometimes with typical flaws of south indian film making but so engrossing are the scenes , that you can overlook them with indulgent smiles.

The special effects and VFX are as world class as in the part 1 and you cant help but get awed by the monstrous sets and scenic locations even though you know they are not real.

The movie is a feast for your eyes and ears which definitely needs to be relished or it is purely your loss. Absolute regards for Rajamouli for his larger than visualisation which has given us this thoroughly entertaining visual extravaganza.

Till you go and watch it in theaters here’s what Rana Daggubati said when NewsMobile asked him the big question- Why Kattappa killed Baahubali?