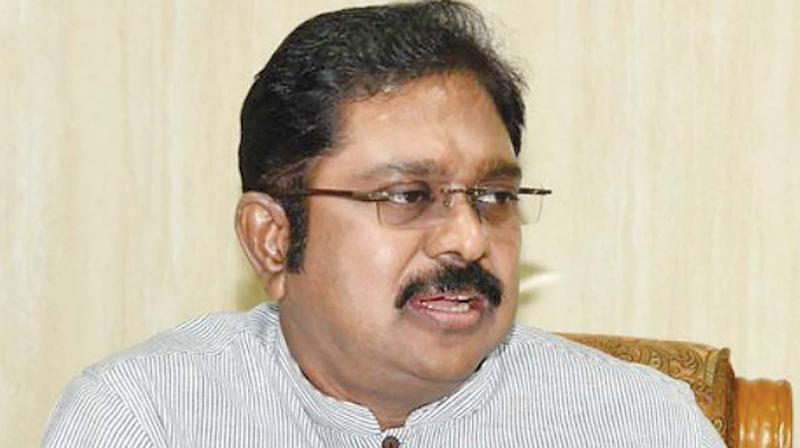 It comes after the Delhi Police yesterday arrested Dinakaran along with his associate Mallikarjun on the charges of attempting to bribe the Election Commission officials to get a favourable order in his petition for ‘Two Leaves’ election symbol.

“In FIR no. 56/17 of Police Station Crime Branch, Delhi Police, for which earlier Sukesh Chandrashekhar was arrested with a bribe amount of Rs. 1.3 crore, on Tuesday Dinakaran and his associate Mallikarjun have also been arrested,” Deputy Commissioner of Police (DCP) (Crime) Madhur Verma said.

He added that Dinakaran has also been charged with arranging money for the said deal for undisclosed sources and getting this money transferred through illegal channels from Chennai to Delhi.

“Mallikarjun has been arrested for assisting Dinakaran in transferring the money from Chennai to Delhi,” Verma asserted.

The police had sought seven-day police custody for Dinakaran and submitted before the court that for an investigation he will be taken to Chennai, Kochi and Bengaluru.

Earlier in the day, Dinakaran had moved a bail application in a Delhi Court.

He was produced before the Tis Hazari Court here.

yesterday, Dinakaran finally accepted that he met Sukesh Chandrashekhar, the man alleged to be the middleman in his bribery dealing with the Election Commission of India (ECI).

Dinakaran, sources say, initially refused to have known Sukesh. He later accepted meeting him when Sukesh himself gave the details of his meeting with the former.

However, Dinakaran maintained that he did not pay any money to Sukesh.

The Crime Branch of the Delhi Police now has to establish the possible reasons for which the two might have met.

For this, they have sought the help of the Election Commission official who helped him dealing with the poll watchdog.

Searches are also being conducted at Sukesh’s Kochi residence to trace the amount paid to him.

Details of calls made and received, and messages sent and received are also being sought.

It is being said that the Crime Branch was trying to get to the core of the issue and believes a nexus is at work, which is run by a higher authority.

Earlier on Sunday, Dinakaran was cross-examined along with his ‘friend’ Mallikarjuna and P.A. Janardhanan, sources state.

They were quizzed about the money trail of the alleged bribe. Also, the matter of Dinakaran staying over with Mallikarjuna for around 10 days after a FIR was filed against him was also brought up during the interrogation.

On Saturday, Dinakaran was given a set of questions by the Delhi Police in connection with the case.

On Thursday, a team of the Delhi Police Crime Branch reached Chennai and served a notice on Dinakaran and asked him to join the probe.

The police had arrested and sent Sukesh to custody for allegedly striking a deal of Rs. 50 crore to help the Dinakaran faction keep the ‘two leaves’ poll symbol.

The Crime Branch recovered approximately Rs. 1.3 crore and two luxury cars, a BMW and a Mercedes, from Chandrashekhar.

Chandrasekhar was picked up from the Hyatt hotel and was produced at the residence of Special Judge Poonam Chaudhry, who allowed the Delhi Police’s plea to interrogate the accused for eight days.

Dinakaran was also named as an accused in the FIR, filed by the Delhi Police Crime Branch.

Dinakaran’s faction contested on the hat symbol for the R.K. Nagar assembly by-polls, after the Election Commission froze their two leaves symbol while acknowledging the split in the party.

The polling was later cancelled by the Election Commission.