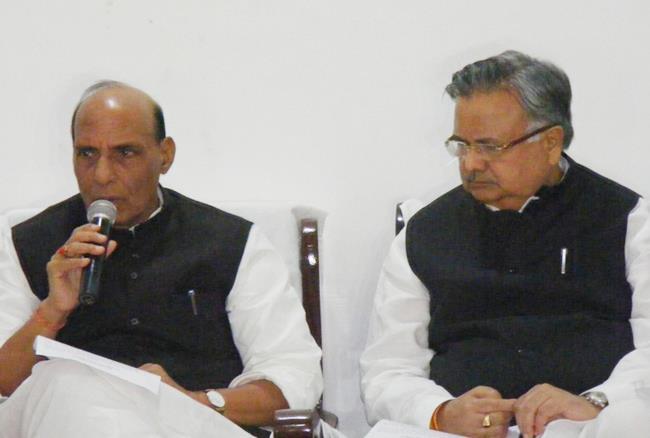 Dubbing the killing of 25 CRPF jawans in Chhattisgarh’s Sukma district as cold-blooded murder, Union Home Minister Rajnath Singh on Tuesday said that the Centre and state government would work together to ensure that the perpetrators are brought to book.

Singh, who paid homage to the jawans during a wreath laying ceremony here along with his deputy Hansraj Ahir and Chief Minister Raman Singh, said this cowardly and unfortunate act exposes desperation and frustration.

“It is a cold blooded murder by the extremists. The Centre and state governments will work together and take action in this regard,” Rajnath told a joint press briefing with the Chief Minister here.

Condemning the attack, the Home Minister said that the sacrifice of the jawans would not go in vain.

He further said that the Centre, if needed, would review and also revise the Left Wing Extremism (LWE) strategy, adding a meeting of officials of various state governments has been called on May 8.

Meanwhile, the Chhattisgarh Chief Minister called for a concrete strategy to counter such attacks, while expressing grief over the death of jawans.

“It’s high time when we need to adopt some strategies to counter such attacks in future. I offer my condolence to the families of deceased jawans,” Raman said.

Earlier in the day, Rajnath paid tribute to the CRPF personnel during their wreath laying ceremony.

Expressing his pain over the incident, the Home Minister yesterday condoled the death of jawans and rushed his deputy to Chhattisgarh to take stock of the situation.

The Chief Minister also reviewed the situation at an emergency meeting of senior officials in Raipur last night.

As many as 25 CRPF personnel were killed and six others injured in the encounter with Naxals in Chhattisgarh’s Sukma yesterday.

The attack took place on personnel of the CRPF’s 74th Battalion as they were assisting the local population in road building activity in the district.