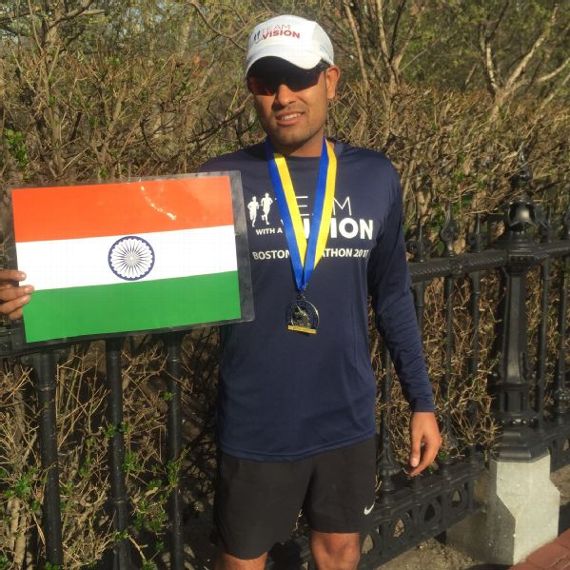 Sagar Baheti, the star of the Boston Marathon 2017 finishing the race with the Indian flag in his hand. He became the first visually impaired runner to participate and finish the race. His parents Vishnukanta and Naresh Baheti flew from India to see his performance and were overwhelmed, while his mum held his laminated flag. “This has to be one of the most significant days for me,” Sagar said.

The 26.2-mile journey was not easy. After running on dirt in India, running on the asphalt course got difficult. At around 17 miles, Baheti felt his shins giving up on him. “I told myself, ‘Even if I have to crawl to the finish line, I am not letting it go. I have to cross the line,'” the 30-year-old runner from Bangalore said.

He was diagnosed with a disease, Stargardt, caused with a deterioration of the central portion of his retina. He may never be entirely blind but his vision will get worse and he wouldn’t be able to see past a centimetre. He participated in many marathons before, but it was his first outside India.

“I went for runs on the streets and saw runners everywhere. They are so much more competitive here,” he said. And he wouldn’t have wanted it any other way, he said. “This is a movement of sorts, and it was incredible to be a part of it.” “Usually, parents inspire children, but now my son is inspiring me,” his mother, Vishnukanta, said.

PM Modi Wears A Cap From Uttarakhand And A Traditional Leirum...