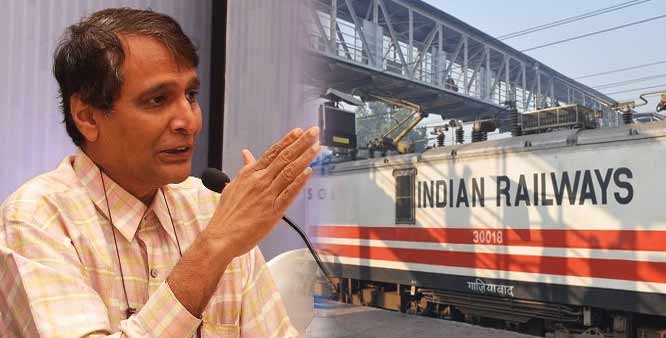 He also asserted that the Centre and the states need to work together for this purpose.

Prabhu was speaking at a function at Chhattisgarh’s Raipur railway station where he inaugurated various passenger facilities for stations falling under the South East Central Railway (SECR) zone.

“With the expansion of rail (services), India can move ahead,” Prabhu said.

“Unless the Centre and the states will not work hand-in-hand, it will not be possible,” he pointed out.

The union minister further underlined the need for the development of Chhattisgarh to make PM’s ‘Make in India’ campaign a success.

“Presently rail projects worth around Rs 24,000 crore are underway in Chhattisgarh and in future many other major projects will be launched in the state which is rich in mineral resources.

“If we want to make the Prime Minister’s initiative of Make in India a success, we need steel, iron ore, coal and other resources and these are in abundance in the state,” he said.

“We have to develop Chhattisgarh for making ‘Make in India’ a success. Transportation of minerals will benefit both the state and railways. Besides, it will also create job opportunities for the youth,” he said.

“An amount of Rs 3,676 crore will be invested in the financial year 2017-18 for rail projects in Chhattisgarh. Seven railway stations in the state will be revamped in such a way that they will have better facilities than airports,” said the railway minister.

These stations will be revamped into iconic structures and will have better passenger amenities, he added.

He said the railway will have an agreement with the state government to provide e-marketing facility to the tribal population engaged in making artefacts.

The e-marketing facility will be provided through the IRCTC website so that the artisans can earn a good return for their art, he added.

As part of the Railway’s green initiative to create green cover along the track, as many as 5 crore trees (saplings) will be planted in Chhattisgarh, Prabhu said.

The Railway and the state government will also work to convert waste into energy.

Besides, the initiative has also been undertaken to revive water bodies that exist in the premises of railway lands, he added.

On the occasion, the union minister along with Chief Minister Raman Singh inaugurated two escalators towards Gudhiyari end of the Raipur station and two lifts for Platform 2/3 and 5/6.

Besides, they also laid the foundation stone for the third line between Rajnandgaon-Nagpur section on Howrah-Mumbai Rail route in Nagpur Division under South East Central Railway (SECR).

Chairman of Railway Board AK Mittal and other senior officials, MPs and MLAs were present for the function.