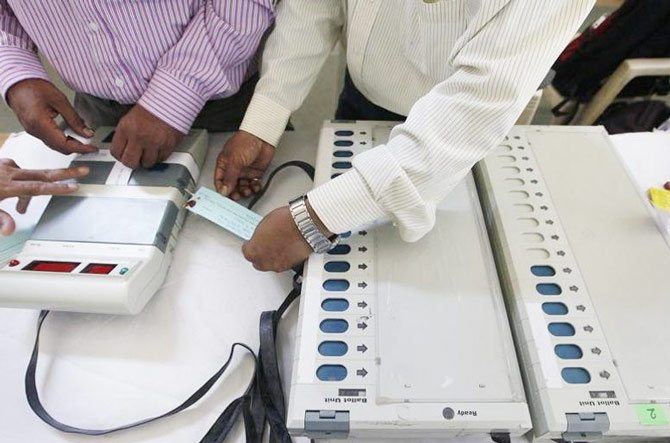 The clearance was given by the Cabinet chaired by Prime Minister Narendra Modi to the proposal of “procurement of VVPAT units” after a brief discussion.
The EC has sought Rs 3,174 crore in all for procuring over 16 lakh paper trail machines to cover all polling stations in the country.

The Cabinet has so far cleared two tranches of Rs 1,009 crore and Rs 9,200 for the Commission to buy new electronic voting machines (EVMs). Since June, 2014, the Commission has given at least 11 reminders to the government seeking funds for VVPAT machines.

Last year, Chief Election Commissioner SNA Zaidi had written to the Prime Minister drawing his attention to the funds needed for the machines.
The Supreme Court has asked the Commission to give a tentative timeframe by which it can use VVPAT machines in all polling stations. The EC says two PSUs — ECIL and BEL — need 30 months to produce the over 16 lakh VVPATs.

Sixteen parties had recently petitioned the EC to revert to paper ballot system for greater transparency. The BSP, the AAP and the Congress had attacked the EC on the issue of alleged tampering of EVMs. The VVPAT is a machine which dispenses a slip with the symbol of the party for which a person has voted for. The slip drops in a box but the voter cannot take it home.

The voters see voter-verifiable paper audit trail slip for seven seconds, which would be an acknowledgement receipt for the party they voted for in the election.