The first photographs of a new and ominous crack in Greenland’s enormous Petermann Glacier were captured by a NASA airborne mission Friday.

NASA’s Operation IceBridge, which has been flying over northwest Greenland for the past several days, took the photos after being provided coordinates by Stef Lhermitte, a professor at Delft University of Technology in the Netherlands, who had spotted the oddly located chasm by examining satellite images. 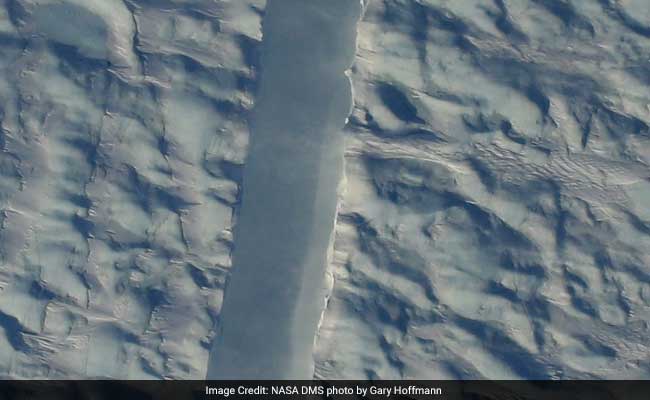 The NASA pictures make clear that a significant new rift has opened near the center of the glacier’s floating ice shelf — an unusual location that raises questions about how it formed. Moreover, this crack is not so distant from another much wider and longer crack that has been slowly extending toward the shelf’s center from its eastern side wall.

If the two cracks were to intersect, then a single break would run across more than half of the ice shelf. That might, in turn, cause the piece to begin to break away. 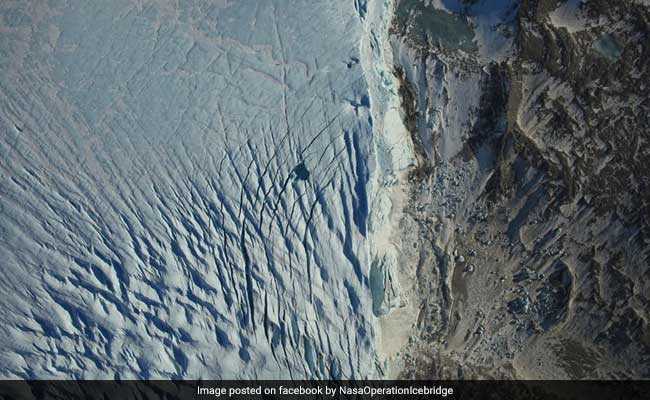 Peterman glacier’s east wall near the terminus of the floating ice shelf.
But in the image, NASA also noted another feature in the ice that it termed a “medial flow line” that, it said, “may exert a stagnating effect on the propagation of the new rift toward the older one.” So it remains to be seen just how much, and how rapidly, the new rift – which has only just been discovered – could undermine the floating ice shelf.

Still, there’s good precedent for worrying about what could happen at Petermann. When two prior ice islands broke off the glacier in 2010 and 2012 – the 2010 island, in particular, was extremely large – the events drew major media attention and were even discussed in a hearing before Congress.

“Last week, an ice sheet covering 100 square miles broke off Greenland,” then-Rep. Edward Markey, D-Mass., the chairman of the Select Committee on Energy Independence and Global Warming, said at the opening of the hearing in summer 2010. “This giant ice island is more than four times the size of Manhattan. It is the largest piece of Arctic ice to break free in nearly half a century.”

Those past breaks also caused the glacier’s floating ice shelf to become much smaller than it had been before.

Petermann Glacier has grown back somewhat since the 2010 and 2012 breaks because of its steady flow outward (at a rate that appears to be accelerating somewhat). But if the next piece breaks off, the size of the glacier would plunge once again, according to Jason Box of the Geological Survey of Denmark and Greenland. Box estimates the resulting ice island would be some 50 to 70 square miles in size, or more than twice the size of Manhattan.
NASA’s Operation IceBridge is a research mission in which instrumented aircraft are flown over ice at both poles – both Greenland and Antarctica – to collect data about the state of polar ice and how it is changing. IceBridge operates over Greenland at this time of year and snapped the photos on what appeared to be a crystal-clear day at the glacier.

It has also taken recent photos of other nearby glaciers, such as Heilprin and Upernavik, and the state of floating sea ice in the channel between northwestern Greenland and northeastern Canada, in addition to its extensive data-gathering work.

After seeing the new NASA images, Lhermitte responded that it was “amazing to see the rift from nearby after studying it from space for several days.” But, he added, “From these images alone, it is difficult to already say anything about what exactly caused the crack on this unusual spot.”

The crack appeared in the middle of the floating shelf, rather than on one of its sides, as is typical of this glacier — leading Lhermitte to wonder whether it could have been caused by the ocean waters below the shelf.

You can bet that scientists will be conducting a great deal more research on this crack, what caused it and whether it might precipitate bigger changes to Petermann Glacier.