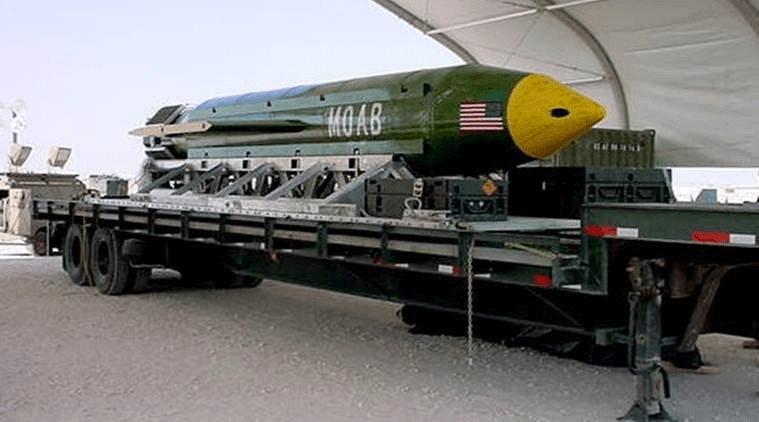 Washington: After US military dropped its largest non-nuclear bomb on Islamic State targets in eastern Afghanistan, American lawmakers have applauded the Trump administration, saying that ‘it sends a clear message’ to terror groups in the region.

The US military on Thursday dropped a GBU-43/B Massive Ordnance Air Blast Bomb (MOAB), nicknamed as ‘Mother Of All Bombs‘ on a tunnel complex of ISIS-Khorasan, a regional affiliate of the terror group, in Achin district of Afghanistan’s Nanagarh province, close to the Pakistani border.

The Afghanistan-Pakistan border area has tunnel complexes known to be used by ISIS and other terrorist groups operating in and out of Afghanistan.

This was the first time a MOAB was used in combat though it was developed in 2003.

According to General John Nicholson, commander of US Forces in Afghanistan:

“As ISIS-Khorasan’s (ISIS-K) losses have mounted, they are using IEDs, bunkers and tunnels to thicken their defence, this is the right munition to reduce these obstacles and maintain the momentum of US offensive against ISIS-K.

“The decision to drop the MOAB in eastern Afghanistan sends a clear message that the US is committed and determined to defeating ISIS and other terrorist organisations in Afghanistan,” said Senator Jim Inhofe, senior member of the Senate Armed Services Committee.

“I spoke to President Ghani and our coalition partners about this same commitment when I visited Kabul this February.

This strike supports our Afghan partners and their fight against these terrorist groups,” he said.

Inhofe applauded President Donald Trump’s commitment to the fight against terror, giving his military commanders and the authorities the need to defeat US enemies and sending a clear message to both enemies and allies of the US.

Congressman Kevin said Trump has sent a strong message to the Islamic State that will be heard in Russia, North Korea, Iran and around the world.

“I applaud our brave men and women in uniform who put their lives on the line every day to keep our country safe,” he said.

“This message was part of his campaign, and eliminating ISIS is critical to the long-term security of the US. The President’s actions also send a clear message that we will no longer tolerate attacks on our troops and that those who do so can expect a swift and strong response,” he said.

However, Democratic lawmakers questioned the intentions behind the use of such a bomb. Congresswoman Barbara Lee said the unprecedented use of a MOAB, which is considered the ‘Mother of All Bombs,’ marks a new front in the almost 16 year war in Afghanistan.

“President Trump owes the American people an explanation about his escalation of military force in Afghanistan and his long-term strategy to defeat ISIS,” she said.

“No president should have a blank check for endless war, especially not this president, who is acting without any checks or oversight from the Republican-controlled Congress,” she said.

Lee urged House Speaker Paul Ryan to call Congress back into session, to can immediately repeal the 2001 Authorization for the Use of Military Force and “put real restraints on Trump’s warmongering.”

She was the only member of Congress to vote against the 2001 Authorization for the Use of Military Force.

Congressman Seth Moulton said the US needs a comprehensive, integrated political-military strategy to ensure the peace after the American military actions are complete.

Indian-American Republican leader Puneet Ahluwalia said this is a clear message of Trump leadership and his administration to terrorist organisations and American adversaries.

“We will not hesitate to use what ever is in our arsenal to defeat our enemies. Our NATO partners and allies can count on US leadership on the world stage again,” he said in a statement.