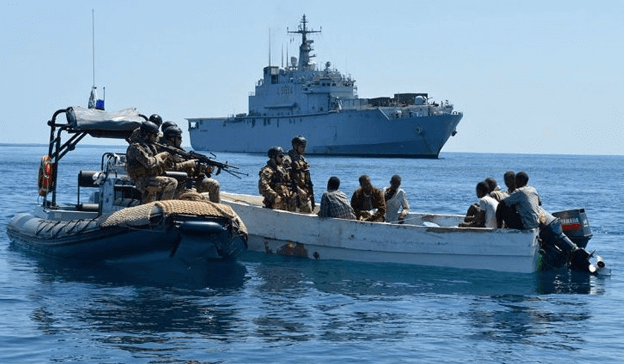 Somalia‘s military has rescued eight Indian crew members who had been held hostage by pirates, an official said today.

The sailors of a ship hijacked last week were rescued after regional forces surrounded their pirate captors in a small village outside Hobyo town, Abdullahi Ahmed Ali, the town’s mayor, told The Associated Press.

Four pirates were arrested during the operation, he said.

All the Indian crew members have now been rescued as two had been freed in the ship on Sunday, the mayor said. Ten crew members were taken captive, not 11 as initially announced by officials, he said.

Pirates made the captive crew members walk long distances in the bush for days to avoid troops that were chasing them.

“They are exhausted and hungry because of that long ordeal,” the mayor said.

India’s external affairs minister, Sushma Swaraj, said on Twitter she was happy to confirm the rescue and thanked Somali authorities. She identified the ship as the MV AL Kausar.

In recent weeks there has been a resurgence of piracy off Somalia’s coast after five years of inactivity.

The piracy was once a serious threat to the global shipping industry but lessened in recent years after an international effort to patrol near Somalia, whose weak central government has been trying to stabilize the country after 25 years of conflict.

But frustrations have been rising among Somali fishermen, including former pirates, at what they say are foreign ships illegally fishing in local waters.

In March, Somali pirates hijacked the Comoros-flagged oil tanker Aris 13, marking the first such seizure of a large commercial vessel since 2012. They later released the vessel and its Sri Lankan crew without conditions, Somali officials said at the time.

Pirates in late March also seized a fishing trawler, which police warned could be used for further piracy. On Saturday, pirates boarded the Lebanese-registered OS 35 cargo ship but abandoned it the next day before naval forces recovered the ship.

I am happy to inform that 10 Indian nationals working as crew on MV AL Kausar which was hijacked by pirates have been rescued. /1

We thank Federal Government of Somalia, Galmudug state authorities and people of Somalia for their help and cooperation. /2

I appreciate Ms.Suchitra Durai, our High Commissioner in Kenya for her good work. /3