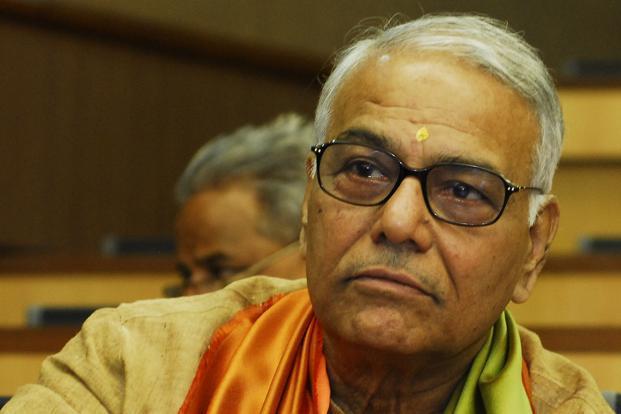 Highlighting the burning need to find a solution to the escalating woes in the Valley, senior BJP leader and former union minister Yashwant Sinha on Wednesday called on the Centre to immediately engage in constructive dialogue with separatists and also drop the notion of branding people as ‘anti-national’ for talking to them.

“Talks with separatists are imperative to attaining peace in the Valley. These days’ the people get branded as anti-nationals for simply talking to the separatists. So, does that make Atal Bihari Vajpayee an anti-national too since he started the trend. Is Advani also an anti-national in that case?”

Chastising the NDA Government for labelling unpalatable elements as ‘anti-national’, Sinha asserted that the trend of attacking those who don’t agree with the Centre will not bear any fruit.

“Peace will return through talks. All Kashmir stakeholders must be involved in talks as was promised by the BJP and PDP,” he added.

Talking about the alarming voter turnout in the Kashmir by-polls, Sinha said this is a matter-of-fact that no one wants to risk their lives by stepping out to cast votes.

Meanwhile, the separatists have asked the people to resume normal activities after a three-day shutdown and thanked them for staying away from the by-polls which witnessed a mere seven percent voter turnout, the lowest in the valley in the last 27 years.

The violence in Budgam in which eight civilians were killed in the clashes between the protesters and security forces was the prime reason behind the low voters’ turnout.

In wake of the prevailing tension in the Kashmir Valley, the Election Commission of India (ECI) on Monday deferred the Anantnag by-polls till 25 May.