Home Politics ‘GST is a revolutionary bill which will benefit all,’ says FM Jaitley 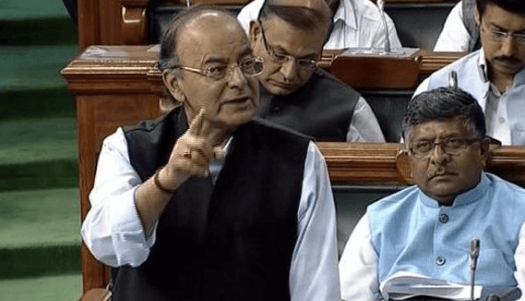 With an aim to implement the mega tax reform Goods and Services Tax (GST) bill, Lok Sabha on Wednesday is debating on the bills.

Union Finance Minister Arun Jaitley leading the Modi government in the lower House of Parliament said that the government wants to pass these landmark tax reforms through consensus.

The FM on Tuesday briefed the BJP MPs after party’s parliamentary party meeting. It has been learned that Jaitley in detail explained the four bills–Central GST, Integrated GST, Union Territory GST and the Compensation Law–to the MPs and how these legislations would be beneficial.

2:36 pm: The GST council will make recommendations to the Centre and the States on issues relating to the tax structure, says FM Jaitley. “It is a kind of federal contract with consensus,” he said.

2:30 pm: FM Jaitley said care will have to be taken to ensure that the various provisions in the GST bills are not misused.

2:27 pm: The GST Council has already approved four-tier tax slabs of 5, 12, 18 and 28 per cent plus an additional cess on demerit goods like luxury cars, aerated drinks and tobacco products. The work on putting various goods and services in the different slabs is slated to begin next month.

2:02 PM: FM Jaitley also said the tax rates will be kept at the current levels so as not to have any inflationary impact.

2:00 pm: FM Jaitley said all decisions on GST would be taken by the GST Council, reflecting the federal structure.

1:58 pm: Besides, GST compensation law allows for imposition of cess on certain luxury goods like tobacco, high-end cars and aereated drinks to create a corpus for compensating states for any loss of revenue in the first five years of GST roll out.

1:54 pm: The fourth law introduced is on Union Territory GST or UTGST for UTs like Chandigarh and Daman and Diu which do not have assemblies.

1:50 pm: FM Jaitley said all decisions on GST would be taken by the GST Council, reflecting the federal structure.

1:47 pm: The CGST Bill makes provisions for levy and collection of tax on intra-state supply of goods or services, the integrated GST deals in taxation of inter-state movement of goods and services while the Union Territory GST Bill covers taxation in Union Territories.

1:45 pm: The compensation bill has been drafted to give a legislative backing to the Centre’s promise to compensate the states for five years for any revenue loss arising out of GST implementation.

1:39 pm: GST Bill is a game changer, don’t think a bigger bill than this has been passed before, says BJP MP Udit Raj.

1:01 pm: We have to rise above politics on the issue, says Moily.

12:59 pm: Entry tax is not clear with respect to merger of taxes with GST, says Veerappa Moily.

12:58 pm: What you have brought today is not a game changer but only a baby step, says Veerappa Moily.

12:57 pm: The tabling of the bills in the Parliament is an important milestone in the process of implementation of GST, says Jaitley.

12:55 PM: The proposed implementation date of July 1, 2017 now appears to be achievable and it is important that businesses get ready to embrace GST, says FM Arun Jaitley.

12:48 pm: States have pooled in their sovereignty into the GST council, and Centre has done the same, says FM Jaitley.

12:36 pm: Aim of GST Council is to decide everything with consensus, says FM Jaitley.

12:35 pm: GST to ensure free movement of goods across the country, says Jaitley.

12:34 pm: It is a revolutionary bill which will benefit all, says FM Jaitley in Lok Sabha.

12:34 pm: CGST Law shall apply to the whole of India except the State of Jammu and Kashmir, says Jaitley.

12:32 pm: GST to ensure one single tax and will ensure free movement of goods across country

12:27 pm: The Bills were earlier cleared by the GST Council, followed by Union Cabinet approval.

12:10 pm: The approval by Parliament and state assemblies to these laws will pave the way replacing the current patchwork of national, state and local levies with a single, unified value added tax system and integrating India as one market.

12:00 pm: The tax reforms, which aim to unify most federal and state taxes, are expected to boost economic growth by about 0.5 percentage points in its first year of implementation.

11:59 am: The government also hopes the new taxes will broaden its revenue base and cut compliance costs for companies.