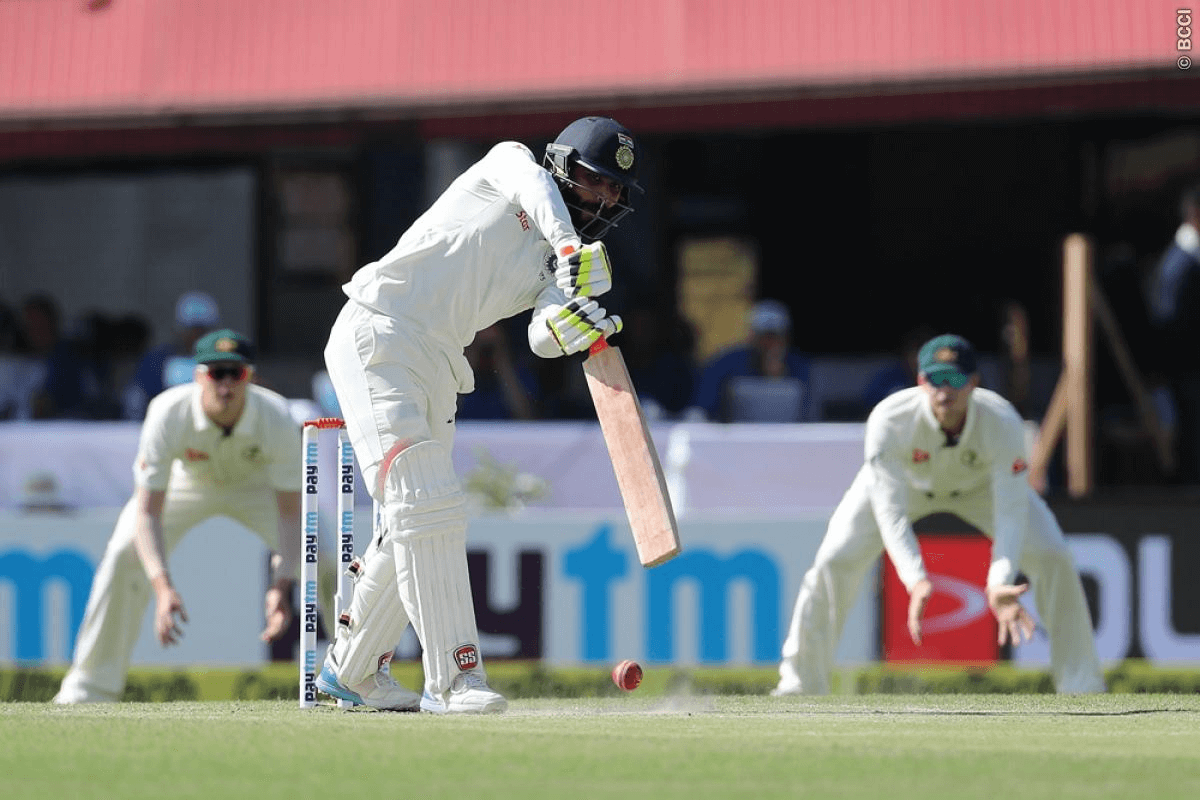 Dharamsala: India is all set to register the test series against Australia as the hosts need 87 more runs to win the fourth and the final test in Dharamsala. Ravindra Jadeja’s stroke-filled half-century put the Indian side on the front foot as India ended its first innings at 332 and gain a slender 32-run lead at lunch on day three of the fourth and final cricket Test.

Jadeja (63 off 95 balls) reached his seventh half-century in Tests with the help of four boundaries and four sixes. The lead however small it may be will certainly provide a psychological advantage to the Indian bowlers.

The seventh wicket partnership of 96 runs in 30 overs with Wriddhiman Saha (31) could well prove to be the turning point on this Dharamsala track, where three Indian spinners will be in operation in the third innings of the match.

For Australia, Nathan Lyon (5/98) had a five-wicket haul.

Saha, on his part again showed steely temperament despite another testing morning spell by Patrick Cummins (3/94) and Josh Hazlewood (1/51).

Jadeja was adjudged caught behind off the very first ball of the third morning bowled by Cummins but he promptly used DRS to get a favourable decision after the TV replays confirmed that there was no edge.

He also got stuck by a snorter from Cummins that hit him on the helmet but the feisty cricketer didn t show any discomfort.

His best shot off the morning was a picture perfect straight drive off Cummins that raced through grass blades.

ALSO READ: FIFA lauds Navi Mumbai venue, says this should be a benchmark

The moment, Lyon flighted one, he jumped out to loft him effortlessly over long-off for his third six. He also had a streaky boundary off Lyon past the slip cordon.

While Saha dabbed around for singles and occasional doubles, Jadeja took risks at will.

A quick single brought up his 50 and there was customary sword wielding celebration from the man. In fact, Jadeja joined Virat Kohli, KL Rahul and Murali Vijay among others, who have surpassed 50 six times in the current season. He also became the second Indian cricketer after Kapil Dev to achieve the double of 500 runs and 50 wickets in the season.

He was not afraid of the short pitched stuff bowled by Cummins as he pulled him to deep mid-wicket for a boundary and then for good measure hooked him behind square for his fourth six.

Cummins had the last laugh when he played on trying to smash a fullish delivery. Bhuvneshwar Kumar s (0) nightmare of a Test match continued as Steve O Keefe got his first victim of the match.

Cummins then got Saha with an unplayable delivery that climbed big on him as he tried to awkwardly fend it. The ball popped up off his gloves and Steve Smith backpedalled and timed his jump to perfection to take a spectacular catch.

For the record, both Jadeja and Saha completed their individual 1000 runs in Test cricket.