This open letter on behalf of the Kargil martyr to Gurmehar Kaur will make you think again | Newsmobile
Saturday, December 10, 2022

Home Nation This open letter on behalf of the Kargil martyr to Gurmehar Kaur...

On Tuesday JNU student Umar Khalid was invited, to speak in the afternoon on a subject related to his PhD, ‘The War in Adivasi Areas’. Khalid was charged with sedition charges the last year for his role in organising a rally at JNU to commemorate the anniversary of the execution of 2001 Parliament attack convict Afzal Guru.

Members of the college student union and the Akhil Bharatiya Vidyarthi Parishad (ABVP) disrupted the event even before Khalid reached the campus. Ramjas students started protesting against it and then the protest became violent where many college students, teachers and journalists were beaten up. After this a Delhi University student, Gurmehar Kaur protested against ABVP by uploading a picture: 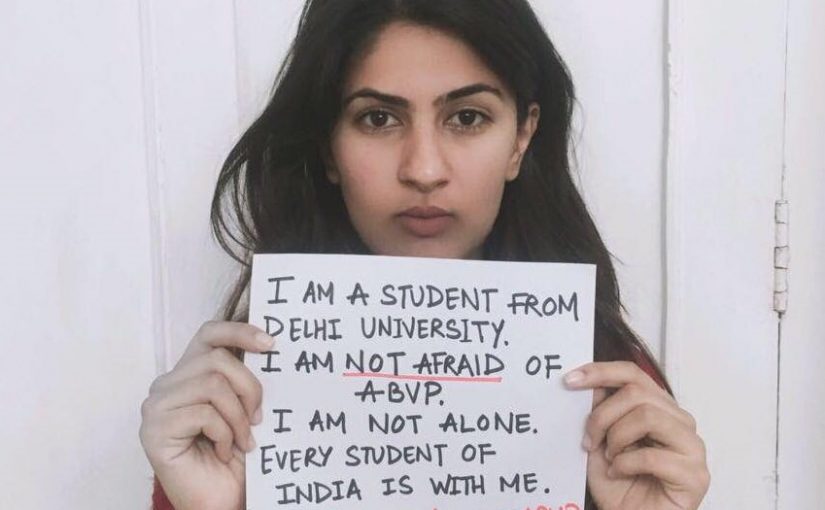 Captain Saurabh Kalia who was an officer of the Indian Army who was killed during the Kargil War while being held as a prisoner of war by the Pakistani security forces. His daughter wrote an open letter to Gurmehar Kaur after she posted a video last year stating that her father was killed by war and not Pakistan.

I came to know about your stand on pro-Azadi protests in Ramjas College recently. You said – “war killed your father not Pakistan”.

Had I been alive today, I would have been 40. So I leave it on you what you want to call me – Uncle or Brother. Both are fine with me.

Just wanted to let you know one thing, Gurmehar. When a solider fights, he knows two things. One is his wish. One is the reality. War is bad. This is wish. War is waged on you. This is the current reality. Both are important in life. A good soldier keeps wishes for the prayers and realities for actions. Those who mix the two are defeated.

Our wish is that Pakistan should be our friend. No harm in it. But do we make strategies based on this? No. Someone who knows even a little of history and present would know that Pakistan was created on an assumption that Muslims can not live with Hindus because latter are impure. Pak means pure. Pakistan was created as ‘land of pure’ as if whatever is rest is impure. Creation of Pakistan and existence of Pakistan both symbolise their assumption that Muslims can not live with Hindus.

Supporting Pakistan or friendship with same amounts to supporting the idea that Muslims can not live with Hindus because latter are impure. If we are truly secular and do not endorse this theory, we must oppose the idea of Pakistan and Pakistan both tooth and nail.

Now coming to your remark – ‘war killed my father not Pakistan’

I salute your father. He gave his life for motherland. But I am also the one who did same. In fact I was the first one who stepped into the whole thing when it was not even a war. I was the whistleblower of the very war which took away your father from you and me from mine.

And Gurmehar, I was not killed in war. I was heading my routine patrol along with 5 other men on 15 May 1999 on my own territory. My patrol party was ambushed by Pakistani soldiers (not war soldiers). We were abducted and taken to the Pakistani side (not war side).

They tortured us for days in peace time. They burned our bodies with cigarettes, pierced our ear-drums with hot rods, punctured our eyes before removing them, broke most of the teeth and bones, fractured the skull, cut the lips, chipped the nose, chopped off limbs and private organs besides inflicting all sorts of physical and mental tortures.

It all continued for 22 days. And then one day, we were shot dead. Not in war time. It was all peace time. Our skeletons were handed over to our parents. In peace time.

So, war did not kill us. Pakistan did.

And now when I look down from heavens on what is going on, I cry in pain. I can see thousands of so called students demanding Azadi from India. They want to break my country.

I died for my mother. Mother India. I was cut into pieces for integrity of India. I never screamed in pain when they were cutting me with daggers. But today, I feel betrayed. I feel ashamed that I died for such thankless traitors. They say they have freedom of expression.

They invited Shehla Rashid and Umar Khalid as guests. These are the same people who advocate Azadi for Kashmir or right of Kashmiri separatists to demand Azadi. Do you know what did those who were cutting our organs each day use to say to us? It was the same Azadi – Hum kya chahte Azadi, Kashmir banega Pakistan, Pakistan se matlab kya La ilaah illillah etc.

Every slogan of Azadi chanted in Ramjas or JNU or anywhere brings back those memories of cut-organs. We relive those moments with pain you can and must never experience with every Azadi slogan.

You ask what was the students’ fault. There was no fault of any student. But anyone who was involved in Azadi march/slogans or inviting these Jihadi bootlickers for lectures was certainly at fault. When they are insulting my martyrdom with those Azadi slogans, I want my people to stand and fight for my honor.

Despite knowing that any such protest directly or indirectly supports the idea of Pakistan, how wise is it to be its part then? You want to lead freedom of expression movement?

Do it against caste system.

Do it against terrorism.

Do it against extremists.

Do it for women.

Do it against triple Talaq and polygamy.

Do it against hooliganism.

Do it against Pakistan.

Do it against the ideology of Pakistan.

Do it against the ideology that asks people to cut organs of a soldier because he is from ‘impure’ race.

Do it against the ideology that beheaded Guru Tegh Bahadur.

Do it against the ideology that bricked Chaar Saahibzaade alive.

Do it against those who raped lacs and killed millions in 1947 and before.

Do it against those who did ethnic cleansing of Kashmiri Hindus from valley.

I hope you take up real issues which not many have guts to. Make us proud.

Written by Dr Vashi Sharma (on behalf of Capt Kalia)