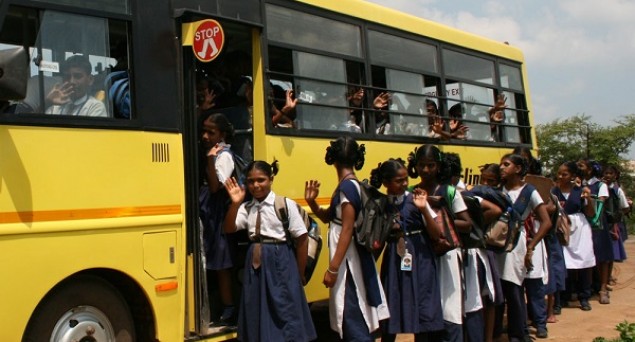 For the greater safety of children, CBSE ensured that the school buses will now have to be equipped with GPS, CCTV arrangements and speed governors as per the revised guidelines issued by the CBSE. These guidelines have been issued on the directions of Human Resource Development minister Prakash Javadekar after a recent school bus accident in Uttar Pradesh.

“Windows of the bus should be fitted with horizontal grills with mesh wires. School buses should be fitted with speed governors with maximum speed limit of 40 km/h. “GPS and CCTV arrangement should be made compulsorily in each vehicle and should be in working condition all the time,” a CBSE circular said. “The management and the head of the school will be held responsible for any lapse and it could lead to disaffiliation too. School buses will have to be fitted with alarm bells and sirens,” it said.
ALSO READ: ‘Kanpur train accident was conspiracy from across the border,’ says Prime Minister

“School authorities have also been directed to voluntarily evolve an arrangement, that in each school bus at least one parent should be present who can oversee the conduct of the driver and the other staff,” the circular said. For the security of students, a transport manager and a “well-trained” lady attendant will have to be designated. Schools will have to provide a mobile phone inside the bus to be used in an emergency situation, it said.

ALSO READ: Wi-Fi passwords from airports around the world at one place

Students will be asked to give their feedback on the transport facility, especially about the driver, the circular said. Last month, 12 minor school students and their bus driver were killed and 35 children injured when their vehicle collided with a lorry near Etah in Uttar Pradesh.