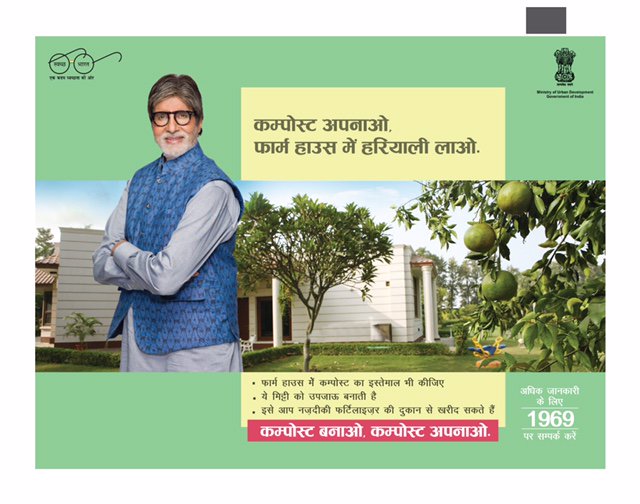 Ministry of Urban Development has launched a new ad campaign featuring Amitabh Bachchan to encourage people to convert their kitchen waste into compost and use it as a fertilizer.

On February 21, The Ministry of Urban Development presented its new campaign ad under the Swachh Bharat Mission (Urban) from Gurugram. Superstar Amitabh Bachchan is the face of this campaign likewise so many others and his involvement promises a larger participation from the public in making this campaign a success.

By the means of this campaign, the Ministry aims to educate people about the scientific treatment of urban solid waste under the Swachh Bharat Mission guidelines. Kitchen waste can be easily converted to compost which is very effective in providing a natural fertilizer. The Government is encouraging one and all to adopt its guidelines, and to buy and sell compost at their nearby fertilizer store.

Giving more information about the same the Executive Officer of the Municipal Corporation and the nodal Officer of the Swachh Bharat Mission, Mr. Vijaypal Yadav informed the media about the Multimedia Strategy adopted by the MoUD for this campaign. To maximize the impact of this campaign the ad will be featured on major television channels, Print Media, Digital Media and Radio broadcasts. Outdoor campaigns such as posters and hoardings will convey the message to every nook and corner of the country.

Mr. Amitabh Bachchan will be reciting legendary dialogues of his famous movies to encourage the targetted groups such as RWA, Nursery, hostel canteens, banquet halls and other major waste producing locations to implement Decentralised Compost Production in their premises. Mr. Bachchan has also appealed to Nursery Owners and Horticulture Agencies to utilize urban waste in their gardens, farmhouses and public parks. In the climax of the ad, Mr. Bachchan concludes with the campaign tagline “Compost Banao – Compost Apnao”, asking the citizens to make the production of compost a regular practice.