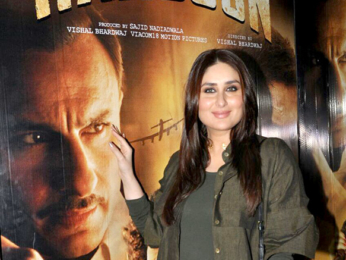 In “Rangoon”, Saif will be seen playing a ruthless Parsi film producer, which marks his return to the negative character zone after portraying Langda Tyagi in Vishal Bharadwaj’s “Omkara”.

Hailing Bhardwaj, with whom she worked in “Omkara”, Kareena said while the negative characters in his films are always striking, this time there will be a competition among all the three actors.

“In Vishal Bhardwaj’s films, the negative character is very striking most of the times. But there are three stellar actors in the film, Shahid, Kangana and Saif. I like the competition, there should be competition between all three only then they’ll give their best,” Kareena told reporters.

“I expect nothing less from them. They are the best performers in the industry today, all three,” she added.

The actress was speaking at a special screening of “Rangoon” last night.

Kareena said though she does not usually attend film trailers, she came for this one for producer Sajid Nadiadwala, Bharadwaj and her husband, for whom she is very excited.

“His (Saif’s) character in the film is going to be very striking because for the first time he will be seen in a role like this. We are very excited.

“This film is special because it is by Sajid Nadiadwala. Karishma did Judwaa with him and I did ‘Kambakht Ishq’. I normally don’t go for trailers and Saif was surprised too. But I had to go because of Vishal, Sajid and Saif.”

The 36-year-old actress also spilled beans on her plans to shoot for her forthcoming “Veere Di Wedding”, post delivering a baby.

“We are starting the film in May. I am very excited. It’s an amazing story about four women. Normally there are hero heroine in films but I think this is the first time a film will be about four different women.