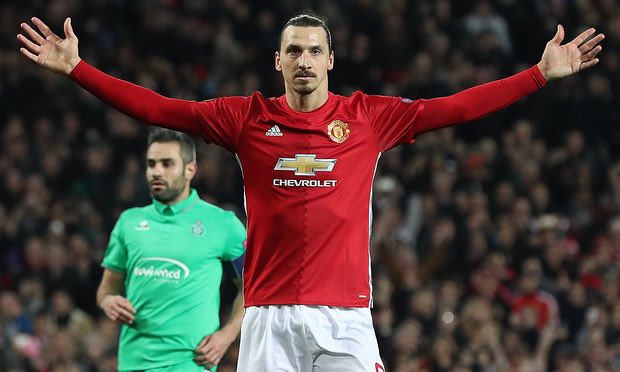 He is 36 years old, witty at times and rude if you tickle him and he plays Zlatan Style football, He is Zlatan Ibrahimovich. When Man United boss Jose Mourinho hired Zlatan after his contract expired with PSG, Man  United fans were not expecting much from the aging Swede. But, as the season started, game after game Zlatan proved himself not only to his favourite manager but also to the fans of Man United. He is not a believer of scoring normal goals, he believes in putting his own touch to them i.e. Zlatan Style as he himself calls it. Last week he became the oldest player in PL history to score 15 goals.

What was missing was the first Zlatan Hat-trick for Manchester United, but yesterday’s fixture against St-Étienne in the UEFA Europa League fulfilled that wish of Man United and Zlatan fans all over the world.

Manchester United controlled the game from the beginning but missed a couple of chances before Zlatan was setup for a free kick just outside the box in the 15th minute. He aimed to get the ball under the wall of St-Étienne players, got a deflection slotting in a much-needed goal.

Then in the 75th minute, again after missing a few chances, Ibra, as the fans call him, found the net again as he tapped a deflected cross from Rashford into the goal, making it 2-0 for United.

Then again in the dying moments of the game (88th minute), Zlatan was fouled in the box, leading to a Manchester united penalty. Zlatan stepped up to take the penalty as fans behind the goal were ready to click the pictures of First Zlatan Hat-trick for Man United and he didn’t disappoint his beloved fans all over the world by scoring a perfect penalty and a perfect hat-trick. Man United will take a healthy lead to the Stade Geoffroy-Guichard for next week’s second leg.

This took the Swede to 23 goals in his debut United campaign, the most since Robin van Persie’s 30 in the 2012-13 season.