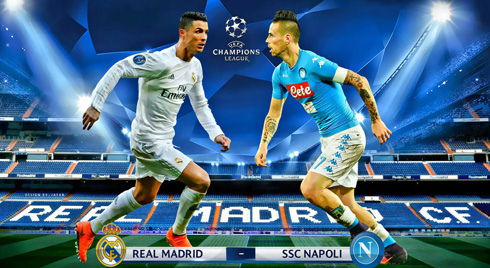 Zinedine Zidane’s Real Madrid will be aiming to secure their place in the quarter-final for the seventh consecutive time when they host Napoli with home advantage. Real Madrid have won 28 of their last European home games , losing only once. Real will hope to make the most of the home advantage as Napoli is in form of their lives being unbeaten in their last 18 games in all competitions. Dries Mertens have scored 14 times in last 11 games, and the Italian giants have a full healthy squad to chose from.

Zinédine Zidane, Madrid coach
The first leg is at home and we want to take advantage, to damage our opponents’ hopes – but obviously they can do the same to us. We’re ready for it. Napoli play good football and Sarri is doing a great job as coach, evidenced by their results. It’s going to be a great game.

Everyone wants to win the Champions League but it’s a long, hard road and we’re on it. That’s the good thing. We’ve got all our players back [though the first leg comes too soon for Gareth Bale].

Maurizio Sarri, Napoli coach
We take risks if we play a defensive game or if we play with our usual style, so I don’t see why we should change. We need to be ourselves, face the match with the idea that we are facing the European champions but it’s important for us to see up to what point we can compete with sides on a world level. The first thing we need to think about is that it is beautiful to play against Real Madrid at the Bernabéu.

The only thing I would not accept would be a performance with fear. Many people ask me about the stadium. This stadium is difficult, almost mystical, but it’s the teams that have played here that were brilliant. Madrid are used to winning at home, but it’s because they’re a great side, not because of the stadium. We’ve had difficult games before, for example against Beşiktaş in Turkey, but our side can play well both at home and away. We’re quick on the counterattack but can also control games and situations.