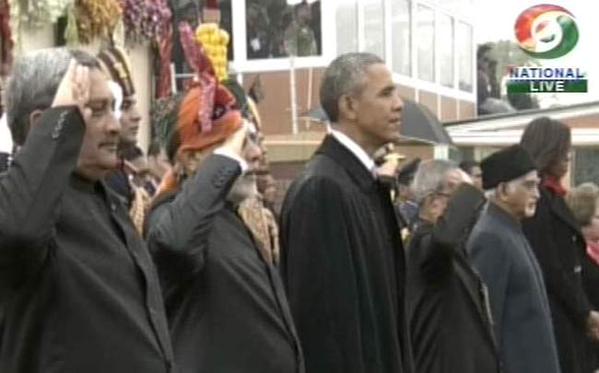 As the people of India were celebrating their  68th Republic Day , the social networks throughout India were abuzz with the “#ResignAnsari” hashtags and similar topics, yet again. When the people of India should have been celebrating the nature of “Unity in Diversity”of its glorious democracy, some  unsocial elements were busy spreading the venom of motivated religious hatred .Vice-President Hamid Ansari was at the receiving end of some ignorant hatred from twitter users who accused him of not saluting the national flag at the Republic Day function while PM Modi and Defense Minister Manohar Parrikar were saluting the flag, as seen in the pictures. 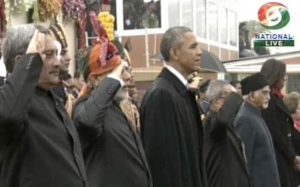 ALSO READ: CRPF camp in Gurgaon gets the tallest tricolour amongst forces

The hashtag’s oldest post date back to 27 January, 2015, when this was first noticed by the so called patriots. The issue was addressed by the general public and many people explained what the Vice-President’s Office had to explain through an official tweet, Gurdeep Singh Sappal, officer on special duty to the Vice-President, tweeted:

“As per the protocol, when the national anthem is played, the principal dignitary and persons in uniform take the salute. Those in civil dress stand in attention,”

“During the Republic Day Parade, the President of India, as Supreme Commander, takes the salute. As per protocol, the vice-president is required to stand in attention, When the vice president is the principal dignitary, he salutes during the national anthem, wearing a headgear, as done at NCC camp this year,”.

It is evident that the issue is sparked again and again at the Republic Day by some people who aim to spread hatred in the society , as they did this year . After the celebrations ended on Sunday, photos in which President Pranab Mukherjee, Prime Minister Narendra Modi, defense minister Manohar Parrikkar saluted the flag while Ansari was standing in attention position,  went viral on Twitter.