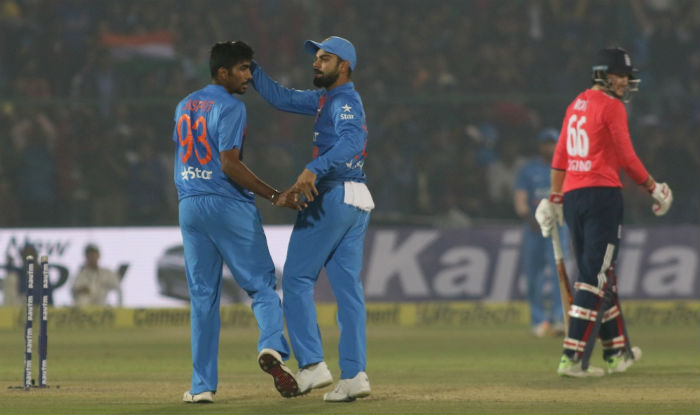 Eoin Morgan won the toss for England and put India to bat in the second T20 at Nagpur. Previous matches at Nagpur were high scoring games with the teams batting second having a clear advantage . The same was expected from this game , but the English Captain Eoin Morgan’s tactics from the very first over prevented India from putting a big score on the board. England started their bowling attack with spin bowling which was supposed to be a deciding factor in this game . Indian openers Captain Virat Kohli and KL Rahul put up a decent opening stand of 30 runs. Kohli was looking good before he mishit a slower delivery from Jordan and Dawson made no mistake in taking a high catch, dismissing Kohli for 21. Next batsman Suresh Raina was not able to make an impression as off spinner Rashid dismissed him on a score of 7. Yuvraj Singh took his time to settle in and play the role of an anchor as KL Rahul started smashing sixes and fours on the other end, but pressure got the better of Yuvraj as he was dismissed leg before wicket by Moin Ali, India were 69-3 at the moment. Manish Pandey walks in while most of the experts believed MS Dhoni should have gone in first.

Meanwhile, English bowlers were at their tactical best as they mixed up their pace with a lot of slower deliveries which definitely troubled Pandey. KL Rahul completed an impressive 50 as India struggled for runs. Another slower delivery from Jordan and a frustrated hit from KL Rahul get caught by the fielder in the deep. Rahul made an impressive 71 off 47 balls.  Dhoni walked in with only a handful of overs to be bowled. Manish Pandey hit a six on Mills delivery before getting bowled in the same over. Pandya and Dhoni tried hard to get the most of the last over but it was Jordan who left the Indians wondering what happened as 3 Indian wickets fell for a mere 5 runs , ending the Indian innings at 144 for 8 .

It was clear that this was not the same high scoring pitch of Nagpur and it was actually difficult to bat on this pitch.

India started the bowling attack with spin as well , as Kohli handed the ball to Yuzvendra Chahal , who bowled a good first over , giving away only two runs. Nehra provided good pace support from the other end. Chahal’s second over was not that impressive as he got hit for two sixes giving away 15 runs off the over. 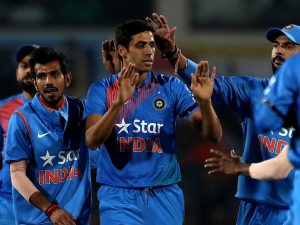 It was Ashish Nehra, who stole the show taking two wickets (Roy and Bills) off the first two balls of the third over and giving India hope. But it was Joe Root and Eoin Morgan who made a good fourth wicket partnership as they kept the scoreboard tickling with singles and doubles with occasional hitting off the loose deliveries taking England to 65 for 2 .

Amit Mishra got the better of Morgan as he hit the first delivery just to find the  man at deep midwicket . Mishra could have repeated Nehra’s feat of taking two wickets off the first two deliveries but his second wicket was ruled out because of a ‘No Ball’.

Stokes and Joe Root held their nerves and tip toed towards the Indian total hitting a few boundaries and taking Enfland to 117 in 16.4 overs. Nehra struck again on the second last ball of 17th over dismissing Ben Stokes for 38 , bowling the crucial slower delivery.

England still needed 27 runs from the last 3 overs as Jasprit Bumra started the 18th over. He bowled beautifully giving only 1 run in the first five balls and 2 on the last delivery .

With the tensions rising with every ball , Nehra stepped in to bowl the 19th over. He conceded 4 runs in the first three deliveries , but then completely lost his focus as Buttler hits him for a boundary , then a double and then a six to end the over leaving India hanging by the thread.

England needed 8 from the last over and Bumrah was spot on with the first delivery dismissing Root for 38 , though a controversial LBW decision by the umpire as the ball seemed to have taken a deflection from the bat. 1 run in next two deliveries shifted the pressure to the English dugout. As a result Bumrah got the better of Buttler bowling him out for 15. Another slower delivery , but England managed a single bye run . Six now needed off the last bowl as Moin Ali faced Bumrah . But Bumrah bowled a perfect full toss which Moin Ali missed completely, handing over the match to India.

The T20 series is now tied at 1-1 with the last and decider match to be played in Bengaluru on 1st of February, 2017.