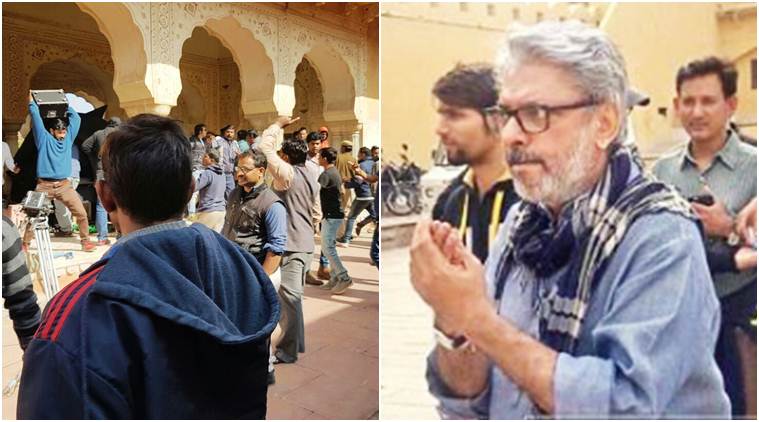 Director Sanjay Leela Bhansali and his crew have canceled the shooting of “Padmavati” here in the wake of the assault on him and vandalism on the sets of the movie by a Rajput group that has triggered outrage in the film industry which is demanding stern action against the culprits.

“The shooting has been stopped by the filmmaker at Jaigarh Fort and they have vacated the place,” SHO Amer police station Narendra Kumar said.

A source close to the production said, “The makers have already clarified that there are no scenes between Padmavati and Allaudin Khilji’s characters. Bhansali has shot his movies in Rajasthan in the past but he never faced any problem. What happened was unfortunate and the team is packing up.”

Bhansali was roughed up by members of a Rajput community group yesterday, who also stopped the shooting of the film by damaging the set at Jaigarh Fort, alleging that the director was “distorting facts” in the movie which is about Alauddin Khilji’s obsession with Rani Padmavati.

Karni Sena today reiterated its stand to oppose any distortion of historical facts and demanded a written assurance from the director while also blaming his security for the commotion yesterday.

“I do not support any violence. The Karni Sena had gone there to oppose the shooting and talk to Bhansali. But he refused to meet and three bullets were fired into the air by his security men which led to provocation and commotion,” Lokendra Singh Kalvi, Karni Sena founder, said at a press conference.

He said they had communicated their objection six months prior to the shooting after they came to know about a supposed the dream sequence of Alauddin Khilji through Ranveer’s interview.

While Bhansali is yet to publicly comment on the issue, the industry, including the film’s three lead stars — Ranveer Singh, Deepika Padukone, and Shahid Kapoor — slammed the fringe outfit for the incident.

Deepika, who is in the titular role of Padmavati, tweeted, “In a state of shock!deeply saddened and disheartened by yesterday’s events!#Padmavati.”

The actress assured that the team behind the film is not distorting any historical facts and their aim is to bring on-screen the story of “courageous and powerful” Padmavati.

“As Padmavati, I can assure you that there is absolutely no distortion of history.#Padmavati. Our only endeavor is & has always been to share with the world the story of this courageous & powerful woman in the purest form there is,” she wrote. Ranveer too termed it an “unfortunate” incident.

“Sanjay Sir is one of the most accomplished & authentic filmmakers we have in India, & he won’t ever do anything to hurt anyone’s feelings,” he tweeted.
Shahid, who is in the role of Raja Ratan Singh, condemned the assault on Bhansali, saying violence is “unacceptable”.

“Very very sad. Words do fall short and feel too little to express feelings. Violence is unacceptable. This incident has shocked me. We need to look deep within as a society, as a country, as a people. Where are we headed,” he wrote.

Terming the incident as “unacceptable”, Film & Television Producers Guild of India Ltd and many leading members of the film fraternity like Salim Khan, Shabana Azmi, Karan Johar, Anurag Kashyap, Hansal Mehta, have urged the government to take strong punitive action against the group.

“The people those who attacked Sanjay Leela Bhansali called themselves Rajputs. The incident is a matter of shame to the noble community,” Salim tweeted. “Film industry must stand as one and do whatever it takes to ensure that the reprehensible attack on SLB becomes a flashpoint for ‘goonda Giri’ to stop,” Azmi tweeted.

Johar, who himself has been at the receiving end of fringe elements during the release of “Ae Dil Hai Mushkil”, said he felt “appalled” at what happened with Bhansali.

“Having been through many instances of turmoil during a film shoot or release… I understand Sanjay’s emotions at this points. I stand by him. “Thoughts of what has transpired with Sanjay Leela Bhansali today are just not leaving me. Feeling helpless and angry. This cannot be our future,” he wrote.

Kashyap said he was surprised that people seem to know the story even though the film is yet to be made. “We living in the times where everyone who does not read or research knows more truth than those who have spent a lifetime doing it,” Kashyap said.

“What happened on Padmavati sets is appalling and heinous. Is this the state of the world,” Sonam tweeted. Mehta said, “The political environment in our country is encouraging for fringe elements and attack on cultural freedom.”

Gowariker tweeted, “Shocking! Appalling!! Despairing!!! And still, we shall not stop making what we want to!! Sanjay stay strong! I am with you! #Padmavati.” Meanwhile, VHP also criticized the filmmaker and said that no attempt to distort the history will be tolerated by the Hindu community.

“A filmmaker is free to depict a fiction but when it comes to historic facts, a huge responsibilities lies with him. Rani Padmavati created history and insult to her will not be tolerated,” Narpat Singh Shekhawat, a state VHP leader said.