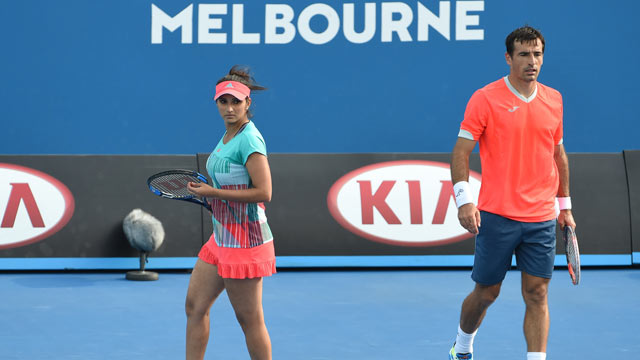 Indian tennis ace, Sania Mirza once again shines at the Australian Open as she along with her Croatian partner Ivan Dodig made their way to the mixed doubles final at the championship by getting the better of the Aussie pairing Samantha Stosur-Sam Groth.

Stosur and Groth had earlier beaten the much fancied but wildcard pairing of Leander Paes and Martina Hingis in the previous round.

Mirza and Dodig’s rivals in the final will be decided later today when Elina Svitolina/Chris Guccione take on Abigail Spears/Juan Sebastian Cabal on Margaret Court Arena.

India’s other mixed doubles pairing in Rohan Bopanna and Gabriela Dabrowski had lost in the quarterfinals to Mirza-Dodig.

In the semifinal, all four players struggled with their serves with as many as seven breaks of serves – five of them coming in the opening set with the men struggling to serve it out.