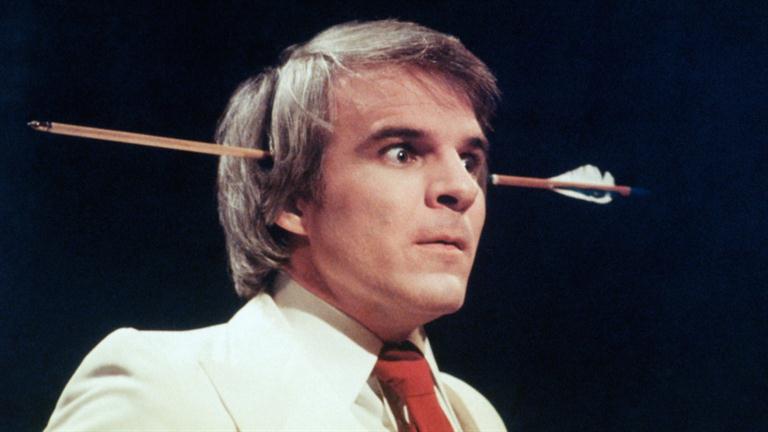 Before all the fame and name, he earned his bread and butter by performing magic tricks and selling guidebooks in Disneyland.

From performing in an empty coffee house to hosting the Oscars, he has garnered prominence for his work in just about every artistic medium there is: standup comic acts, starring in and writing a series of classic films; writing plays, bestselling novels and banjo player.

In 2004, Comedy Central ranked him at sixth place in a list of the 100 greatest stand-up comics.

Stephen Glenn “Steve” Martin was born on August 14, 1945 in Texas. As a teenager, Martin sold guidebooks and performed magic tricks at Disneyland and at Knotts Berry Farm.

He enrolled in Long Beach State College to study philosophy, but soon transferred to the theater program at the University of California, Los Angeles.

In 1967, Martin began performing comedy in nightclubs around California. Dropping out of college at age 21, he got his first TV job as a writer and occasional performer on “The Smothers Brothers Comedy Hour”. His first stand-up album, Let’s Get Small, was a huge success, launching Martin into rock-star status as a comic.

In 1979, he starred in his first full-length feature film, “The Jerk”. Throughout the 1980s, Martin continued to headline films including “The Man with Two Brains”, “Three Amigos!” and “Planes, Trains and Automobiles”.

A frequent contributor to “The New Yorker” magazine, Martin published “Shopgirl”, a novella, to great acclaim in 2001. In 2008, Martin published “Born Standing Up”, a memoir about his days as a hugely successful stand-up comedian.