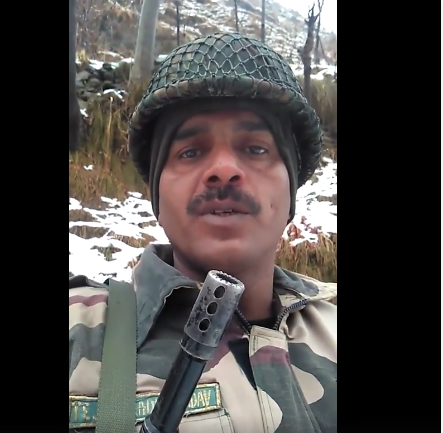 The Union Home Ministry has asked BSF to submit a fact report by tomorrow in the case involving a jawan, who claimed poor quality food was being served to soldiers on the LoC, whose social media video posts have prompted authorities to initiate action into the allegations.

Officials said the Border Security Force (BSF) headquarters here has already submitted a preliminary report in the case to the Home Ministry today and a full report is being prepared by a Deputy Inspector General (DIG)-rank officer who is based in Jammu and Kashmir.

Union Home Minister Rajnath Singh had also taken note of the video yesterday and ordered an “appropriate action” into the incident.  “I have seen a video regarding a BSF jawan’s plight. I have asked the HS (Home Secretary) to immediately seek a report from the BSF & take appropriate action,” Singh had tweeted.

Earlier in the day, BSF said the constable, Tej Bahadur Yadav of the 29th battalion, who posted these videos was court-martialed in 2010 for indiscipline and aiming a gun at a senior officer even as it assured of a thorough probe into his allegations. The border guarding force, in a statement issued yesterday, had called Yadav a “bad hat” and habitual offender.

“Constable Tej Bahadur as an individual has a difficult past. From initial days of his career, he needed regular counselling. Different correction mechanics have been applied for the individual’s welfare as he was the habitual offender of absenteeism without permission, chronic alcoholism, misbehaving and using force with superior officers and certain other acts against good order and discipline,” it had said.

“A high-level enquiry is underway as the BSF has taken the allegations levelled by the constable very seriously. “However, prima facie it was found that no other jawan deployed at the same place had any problem with the quality of food being served to them,” BSF Inspector General in Jammu D K Upadhyaya told reporters.

In videos uploaded on social media platforms, the jawan, wearing camouflage uniform and carrying a rifle, claimed that while government procures essentials for them, the higher-ups and officers “sell it off” in an “illegal” manner in the market and they have to suffer.

He had also alleged that troops are facing “cruelty” as they are served “bad quality” food and even have to go “empty stomach” at times. The jawan hails from Mahendragarh district of Haryana and had joined the force in 1996.

Yadav was currently deployed along the Line of Control in the Rajouri sector of J and K and has now been shifted to a nearby battalion pending the Court of Inquiry (CoI).