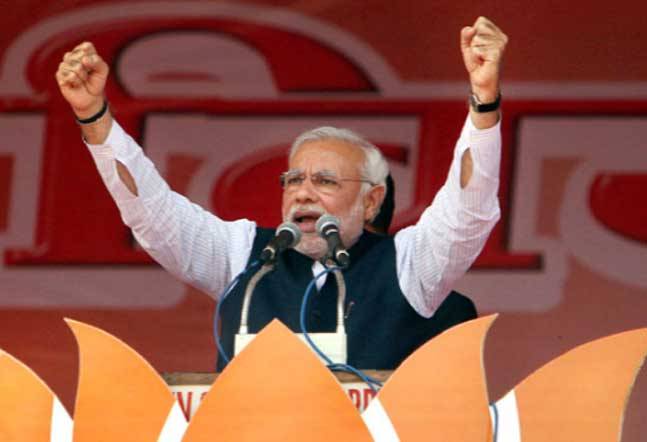 Kanpur: Scaling up his attack on Opposition over demonetisation issue, Prime Minister Narendra Modi on Monday alleged that the Parliament was not allowed to function as opposition parties were trying to defend the dishonest and were running away from a debate on the issue of corruption and black money.

Addressing BJP’s ‘Parivartan Rally‘ in Kanpur, he also said some politicians tried to “provoke” people standing in ATM queues, but their designs were not allowed to succeed as the common man was patient and understood that larger interest of the country was at stake.

PM Modi said at an all-party meeting convened before the Winter session of Parliament, he had suggested a debate on simultaneous elections to Lok Sabha and state assemblies and donations to political parties.

But Parliament was not allowed to function for a month as the opposition parties were not interested in a discussion on the two issue, the Prime Minister said.

He said earlier, the opposition used to disrupt Parliament as they wanted to expose the corrupt, bring out scams. But this time, Parliament was disrupted as opposition wanted to defend the dishonest and hence were running away from the debate, he alleged.

He was quoted saying:

“Our agenda is to fight for a country free of corruption and black money. But their agenda is to close (disrupt) Parliament…I am puzzled.”

Singling out Congress, he said its leaders have often claimed that Late Rajiv Gandhi brought the computer and mobile phone to the common man in India.

He was also quoted saying:

“But now when I say mobile phone can be used as a bank, they say the poor do not have a cell phone…they said people do not have bank accounts. Now they claim poor went to the bank, but there was no money…they are spreading lies.”,