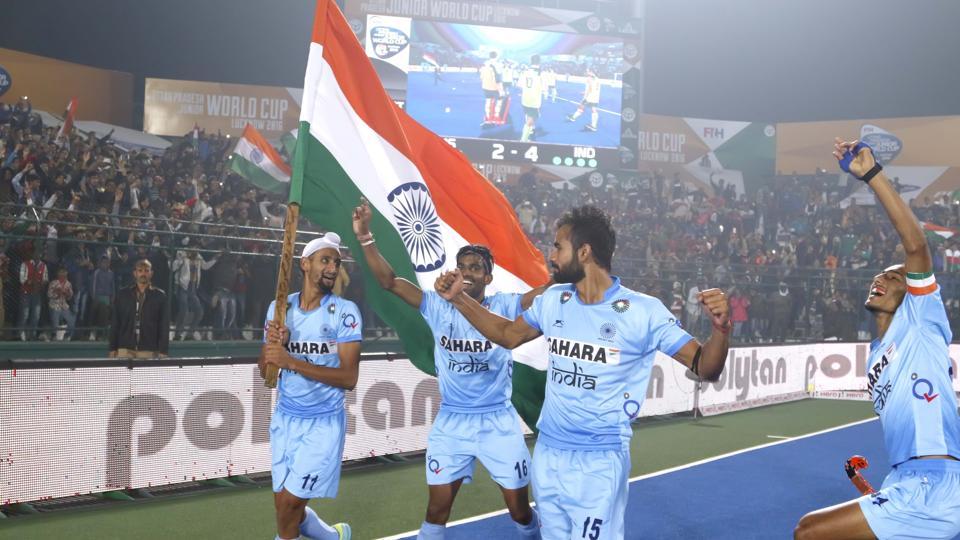 Lucknow: Hosts India on Sunday created history by winning the FIH Junior Hockey World Cup after a gap of 15 long years with a clinical 2-1 victory against Belgium in the final.

The hosts scored two beautifully crafted field goals in the first half through Gurjant Singh (8th minute) and Simranjeet Singh (22nd) while controlling the proceedings for the better part of the game to emerge as deserving winners.

The team coached by Harendra Singh in association with senior team’s chief coach Roelant Oltmans accomplished what the ‘Class of 2001’ comprising of some of the best of their times like Gagan Ajit Singh, Yugraj Singh achieved then.

Having finished a lowly 13th in the last edition of the tournament in New Delhi, it was a mission for the hosts to rewrite history and the hosts duly achieved that riding on its brilliant performance in the 11th edition of the event.

It turned out to be a historic day for India as they reclaimed the title for the second time in the history of the tournament. India had last won the tournament way back in 2001 in Hobart.

It was also the first time that a host nation had won the tournament since its inception.

Cheered by a vociferous home crowd, the Indians produced a clinical performance a “perfect game” which the team’s coaching staff was eying for in order to revive the fortunes of the game in a nation, which has boasted of a rich hockey tradition.

With the title in sight, the Indians went on the offensive from the word go and put the Belgian defence under tremendous pressure with continuous raids.

India’s relentless pressure on the opposition striking circle earned them two penalty corners in the opening six minutes but as has been the case in the tournament so far, the hosts wasted both the opportunities.

But it didn’t take India too long to surge ahead as they drew the first blood in the eighth minute through Gurjant’s fantastic field strike.

The goal was set up by the brilliant scoop from Sumit from the deep which ricocheted from the Belgian goalkeeper’s chestguard on to Gurjant’s sticks and the lanky striker pounced on the opportunity and unleashed a fierce reverse hit from a tight angle to beat the Loic van Doren all ends up.

A minute later Nilkanta Sharma came tantalisingly close to hand India a two-goal advantage but his shot from the top of the circle went just wide.

The Indians kept up the pressure and doubled their lead in the 22nd minute through Simranjeet’s reverse shot from the top of the circle after he was fed by a measured pass from Nilkanta.

Stunned by India’s aggression with a partisan crowd to contend with, Belgium went for goals and in the process secured their first penalty corner in the 30th minute but the opportunity went wasted as the hosts went into the breather with a comfortable 2-0 lead.

Earlier in the day, six-time champions and title holders Germany had to contend themselves with the bronze medal after outclassing Australia 3-0 in the third-fourth place play-off match.