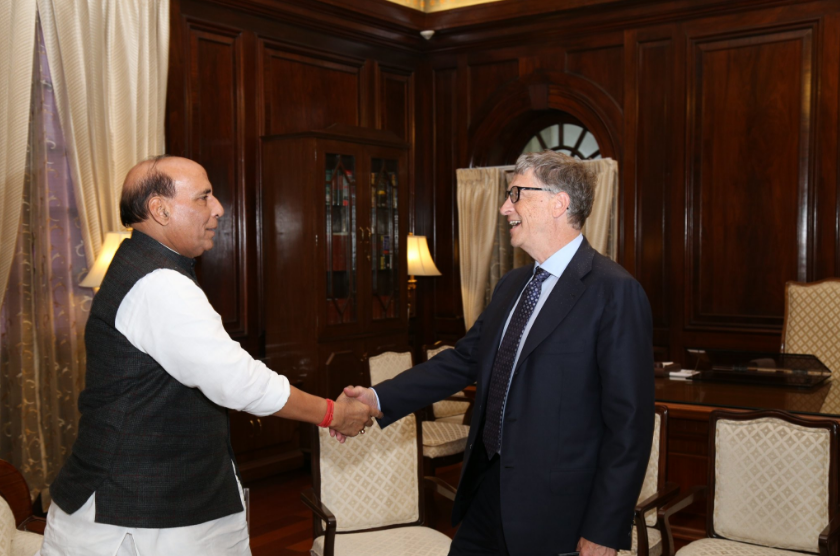 Bill Gates, founder of Microsoft and co-Chairperson of the Bill and Melinda Gates Foundation, today met Home Minister Rajnath Singh, who asked him to support Central government’s efforts for skill up gradation of workers in agriculture sector.

Commending the welfare schemes being run by the Gates Foundation in India, Singh said after the success of its ‘Ananya’ child care and maternal health programme in Uttar Pradesh and Bihar, the scheme should also be implemented in Chhattisgarh, Jharkhand and Odisha where there is a large tribal population.

Had a good meeting with the founder of Microsoft and co-founder of the Bill & Melinda Gates Foundation, Mr. @BillGates in New Delhi today pic.twitter.com/AqjmPz5R4y

ALSO READ: Xchange Over Coffee: A stall with a quirky idea

The Home Minister invited Gates to support the Central government’s initiative to give a major push to skill up gradation of workers in India’s agriculture sector, an official statement said.

Singh lauded the Gates Foundation’s ‘Awahan’ initiative which has helped reduce the spread of HIV infection across India.

The Home Minister said the Central government has laid stress on the JAM (Jan Dhan Accounts, Aadhar Number and Mobile Governance) platform and hoped Gates’ Potential Digital Financial Inclusion Models can be adopted to improve the Service Delivery System in the country, the statement said.