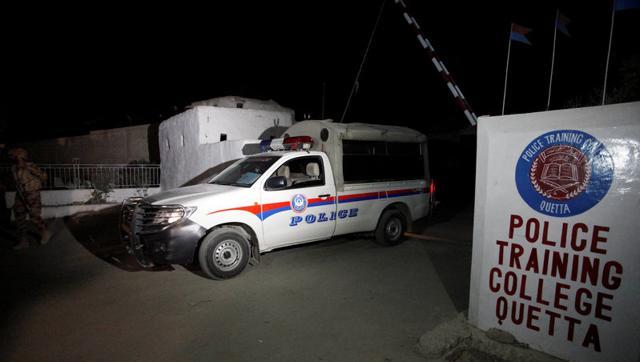 The overnight attack on a police training academy in Pakistan’s restive Quetta city has left over 60 cadets besides three militants dead, with 118 injured, making it one of the deadliest strikes in the country this year.

The attack on the Police Training College on Saryab Road in the Balochistan province capital began at around 11:10 PM last night, triggering an operation by Pakistani security forces who rescued hundreds of cadets from the academy.

“More than 60 police cadets were killed in the attack while about 115 were injured,” a security source said.

Bugti had earlier told reporters that the attack had been carried out by three terrorists, cycling back on an earlier estimate by Inter-Services Public Relations (ISPR) of “five to six terrorists”.

Bugti said there were around 700 police cadets and recruits in the college hostel when the attack took place.

While two of the militants had blown themselves up after being cornered, one was killed in an exchange of fire with security forces. All three were wearing suicide vests, Frontier Corps IG, Major General Sher Afghan said.

The three terrorists were believed to be from the Al-Alimi faction of the Lashkar-e-Jhangvi militant group affiliated with the Pakistani Taliban, he added.

He told reporters that the militants were communicating with handlers in Afghanistan and taking instructions from them.

Security forces had “cleared the college in four hours”, he said. Police, meanhwile, said the compound had been cleared but search operations were still on. Local media footage showed some security vehicles leaving the college.

Bugti said the injured people, mostly police cadets and security personnel, had been shifted to the Civil hospital, Bolan Medical College hospital and Military hospital in Quetta. “The condition of some is critical,” he said.

Militants have conducted several attacks against security forces and national installations in Balochistan, which has been plagued by insurgency and growing sectarian killings for more than a decade.

The attack came a day after separatist gunmen for the Baloch Liberation Army on a motorcycle shot dead two coast guards and a civilian in coastal town of Jiwani near the Gwadar port in the same province.

In August, a suicide bombing at the Civil hospital in Quetta killed 73 people, most of them lawyers. A splinter group of the Tehreek-e-Taliban Pakistan as well as the IS claimed responsibility for carrying out the attack.