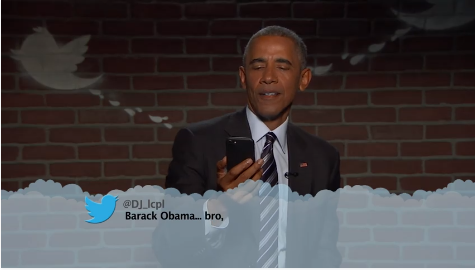 Barack Obama is surely one of the coolest Presidents US have ever got. Time and again he proved that, and once again he gave the reason to call him a baller. Returned as a guest to Jimmy Kimmel Live on Monday night, he gave a stunning reply to some of the ‘Mean Tweets’.

He churned through some of the usual jabs without commentary — “Barack Obama is the Nickelback of presidents,” for example — before getting a little feisty. To the person who wrote “Barack Obama dances like how his jeans look,” he said, “You know, this jeans thing — this is so… old. This was years ago. Come on.” And to the guy who wrote, “Barack Obama… bro, do you even lift!?” he returned fire with a bit of trade policy: “Well, I lifted the ban on Cuban cigars — that’s worth something.”

But it was his comeback to Donald Trump’s e-barb that received his loudest cheer.

After repeating the Republican nominee’s cutdown of “President Obama will go down as perhaps the worst president in the history of the United States!” Obama said, “Well, @realdonaldtrump, at least I will go down as a president.” And then he did the only thing he could do: He dropped the mic, er, phone. Obama out.