Republican presidential nominee Donald Trump and Democratic Hillary Clinton had their final face off on Thursday. At the third presidential debate, Donald Trump cited India and China’s high growth rates to compare them with America’s economy, which he said is “dying”, as he slammed his Democratic rival Hillary Clinton’s plans to boost the economy and called her tax plan a disaster.

As the two candidates came face-to-face for the third and final presidential debate+ at the University of Nevada here, just three weeks before the elections, they sparred on issues concerning the economy, nuclear weapons, Russia and their fitness to be US President. 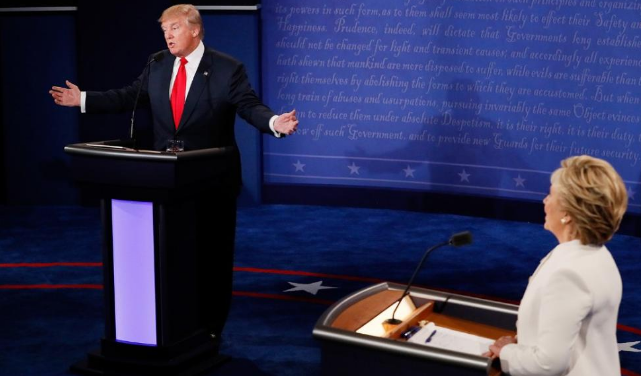 “So I just met some high representatives of India. They are growing at eight per cent. China is growing at 7%t, and that for them in the catastrophically low number. We are growing our last report came out, it’s right over from the one per cent level. And I think it’s going down,” Trump said in response to a question on the economy asked by moderator Chris Wallace.

He said America’s job reports is “anemic”+ and “terrible” and the country is losing its businesses.

“Last week, as you know, the end of last week, they came out with an anemic jobs report. A terrible jobs report,” he said.

Trump also blamed Clinton’s husband former president Bill Clinton for putting in place the North American Free Trade Agreement (NAFTA) agreement, saying it “is one of the worst deals ever made of any kind of signed by anybody.”

ALSO READ: NewsMobile Exclusive: Interview with US Millenials about #USElections

“Now, she can say her husband did well, but boy, did they suffer as NAFTA kicked in because it did not really kick in very much. That was one of the worst things that ever happened in our country. Now she wants to sign transpacific partnership. And she wants it — she lied when she said she didn’t call it the gold standard. Totally lied — she did call it the gold standard,” he said.

Trump said the US will have to tell Japan, Germany and Saudi Arabia to pay up.

“When I said Japan and Germany — and I’m not just singling them out but South Korea — these are very rich powerful countries. Saudi Arabia — nothing but money, we protect Saudi Arabia. Why aren’t they paying?

“We have to tell Germany all these countries we have to say you have to help us out,” Trump said.

Clinton said her plan to boost the economy will involve having the wealthy pay their fair share.

“We are going to have corporations make a contribution greater than they are now to our country. That is a plan that has been analysed by independent experts that said it could produce ten million new jobs.

“By contrast, Donald’s plan has been analysed to conclude it might lose three and half million jobs. Why? Because his whole plan is to cut taxes to cut give the biggest tax breaks ever to the wealthy and the corporations,” she said.

Trump countered by saying under his administration, he is going to renegotiate trade and have more free trade than right now and terminate NAFTA.