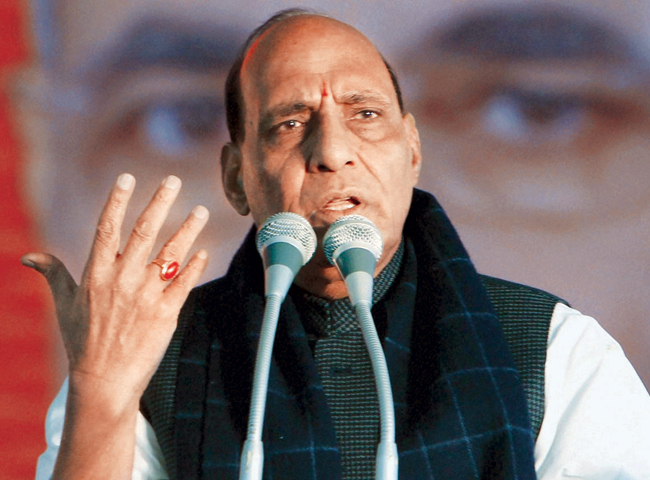 Chandigarh: Mounting a scathing attack on Pakistan, Home Minister Rajnath Singh on Monday said its entire establishment is engaged in fuelling terrorism in India making management of the Indo-Pak border “challenging” and warned that “those who breed snakes get bitten by them”.

He slammed Islamabad for adopting a “very flexible” approach to deal with terrorism and said if it wanted, India can help it carry out an anti-terror campaign in PoK.

Singh asserted that India is against Pakistan-sponsored terrorism and does not breed any hatred towards Pakistani people.

Addressing a two-day Regional Editors Conference from north and northeast states here, he said, “Pakistan is so much obsessed with Kashmir that it cannot see the difference between a freedom fighter and a terrorist. When there is a talk about state and non-state actors, the argument put forward is that Pakistan is a non-state actor.

“The truth remains that the entire establishment in Pakistan is engaged in fuelling terrorism in India. And that is why managing our borders with Pakistan, as compared to other countries, has become a challenging task.”

Pakistan has adopted terrorism as its state policy and is getting isolated in the entire international community, the minister said.

“Pakistan is so obsessed with some issues that it cannot do any good, nor can it see its own good. By adopting terrorism as state policy, it is isolating itself not only in south Asia but in the entire international community.

It was stated that no state should allow its territory to be used for terror activities,” he said.

He also denounced Pakistan for adopting a “very flexible” approach to deal with terrorism.

“As far as our relations with Pakistan are concerned, the biggest hurdle is that Pakistan’s approach towards terror remains very flexible. Those who breed snakes get bitten by them. Pakistan should understand this. India wants that terrorism should be wiped out from the entire region,” Singh said.

“If Pakistan’s intention to act against terrorism remains clear, India will help it conduct an anti-terror campaign in PoK. It can also take help from anyone in the global community, but its intention is not clear. If terror factories operating across the border are closed down, it can usher peace in the region and open doors for development.