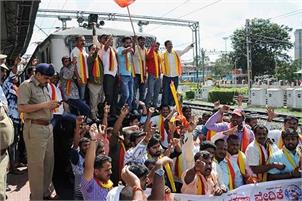 Chennai: Opposition parties including the DMK on Monday joined the state-wide rail blockade protest announced by a farmer’s federation over the Cauvery issue, urging the Centre to set up the Cauvery Management Board (CMB).

DMK Treasurer and Opposition Leader in Tamil Nadu Assembly, MK Stalin was among those who participated in the protests held in different parts of the state including Chennai and the Cauvery delta districts.

Stalin led a procession at Perambur here even as scores of political workers belonging to DMK, the Left parties, and MDMK among others staged a rail roko at Thanjavur and Cuddalore, and were detained.

A farmers’ federation had called for the two-day rail blockade starting today, urging the Centre to immediately constitute the CMB.

The protests come days after a high-level technical team, set up by the Supreme Court, completed its inspection of Cauvery basin region in Tamil Nadu to assess the situation in the state.

The team, which also inspected the Cauvery basin in Karnataka, is set to submit its report in the apex court today.

The apex court had set up the team while hearing a petition by Tamil Nadu government seeking the release of Cauvery water by Karnataka.