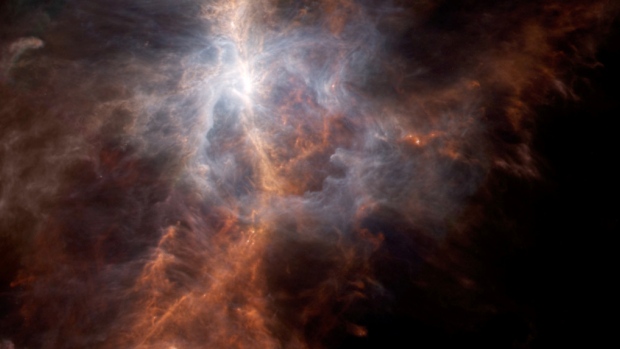 Ultraviolet light from stars plays a key role in creating molecules essential for life, rather than ‘shock’ events that create turbulence, scientists have found.

Researchers using data from the European Space Agency‘s Herschel Space Observatory studied the ingredients of carbon chemistry in the Orion Nebula, the closest star-forming region to Earth that forms massive stars. They mapped the amount, temperature and motions of the carbon-hydrogen molecule (CH), the carbon-hydrogen positive ion (CH+) and their parent: the carbon ion (C+). An ion is an atom or molecule with an imbalance of protons and electrons, resulting in a net charge.

“We have learned that starlight drives the formation of chemicals that are precursors to chemicals that we need to make life,” said Patrick Morris, researcher at California Institute of Technology in the US. Herschel probes an area of the electromagnetic spectrum that no other space telescope has reached before, so it could take into account the entire Orion Nebula instead of individual stars within. The instrument they used to obtain their data, HIFI, is also extremely sensitive to the motion of the gas clouds.

One of the leading theories about the origins of basic hydrocarbons has been that they formed in “shocks,” events that create a lot of turbulence, such as exploding supernovae or young stars spitting out material. Areas of molecular clouds that have a lot of turbulence generally create shocks. Like a large wave hitting a boat, shock waves cause vibrations in material they encounter. Those vibrations can knock electrons off atoms, making them ions, which are more likely to combine. However, the new study found no correlation between these shocks and CH+ in the Orion Nebula.

Herschel data show that these CH+ molecules were more likely created by the ultraviolet emission of very young stars in the Orion Nebula, which, compared to the sun, are hotter, far more massive and emit much more ultraviolet light. When a molecule absorbs a photon of light, it becomes “excited” and has more energy to react with other particles. The hydrogen molecule vibrates, rotates faster or both when hit by an ultraviolet photon.

It has long been known that the Orion Nebula has a lot of hydrogen gas. When ultraviolet light from large stars heats up the surrounding hydrogen molecules, this creates prime conditions for forming hydrocarbons. As the interstellar hydrogen gets warmer, carbon ions that originally formed in stars begin to react with the molecular hydrogen, creating CH+. Eventually the CH+ captures an electron to form the neutral CH molecule. Scientists combined Herschel data with models of molecular formation and found that ultraviolet light is the best explanation for how hydrocarbons form in the Orion Nebula.