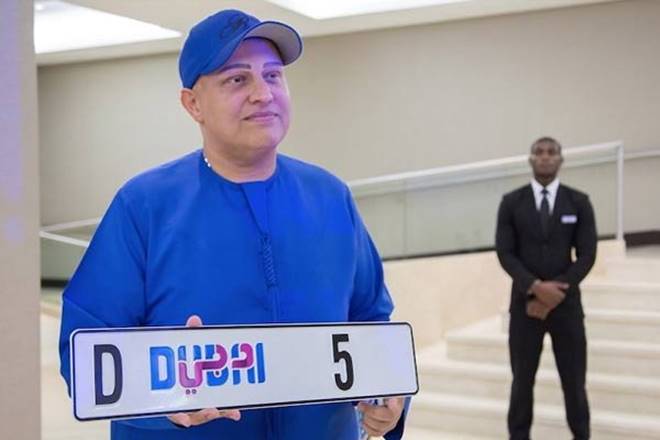 An Indian businessman has paid a whopping USD 9 million to buy a single-digit car registeration plate in Dubai, adding another coveted number plate to his collection.

Sahani, also known as Abu Sabah, is the owner of RSG International, a property management company, with interests in the UAE, Kuwait, India and the US.

“I like collecting unique number plates and I am proud to have got this number. I like number nine and D5 adds up to nine, so I went for it,” Sahani was quoted by saying by the Gulf News.

He said that last year he bought the vehicle number plate O9 for 25 million Dirhams.

“I have collected 10 number plates so far and I am looking forward to having more. It’s a passion. This number will go to one of my Rolls Royces,” he added.
The number generated great interest among the participants with the bid starting at 20 million Dirham.

More than 300 bidders participated at the live auction which takes place every two months, witnessing fierce battle between bidders for some unique numbers.
Eighty unique numbers were on offer yesterday ranging from one two five digits.
The other number plate that attracted big money was “Q77” which was bought by an Emirati bidder for 4.52 million Dirhams.

A few other numbers bagged more than a million including “P27” that went for 2.14 million Dirhams.