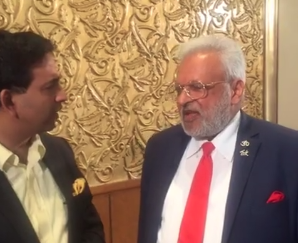 In a special live with Mr. Saurabh Shukla, Editor in Chief, NewsMobile, Shalabh Kumar, Donald Trump’s India man spoke about how the US presidential candidate thinks of India.

Mr. Shalabh is an Indian American industrialist and a philanthropist based out of Chicago.

He said that Donald Trump wants to combat the terror that is sponsored by nations across Indian borders. He also said that he believes that Indians and HIndus are peace loving, nice and friendly people.

Watch the entire video of the interview here, and like NewsMobile’s Facebook page for more such live updates.