New Delhi: A week after the Indian Army conducted surgical strikes across the Line of Control (LoC) in Pakistan occupied Kashmir (PoK), reports emerged revealing Pakistan’s statement in which terror sponsor state claimed that no such surgical strike had taken place, and Indian Army and government was framed in questions over strikes.

But, if witnesses across the LoC are to be believed, bodies of the terrorists during the surgical strikes on September 29 were transported in trucks for funerals. The eyewitnesses also have presented graphic details of the strikes.

Not disclosing the identities of the eyewitnesses, a report of The Indian Express says, the complete account of the strikes came from two witnesses who attended Dudhnial, a small hamlet, about four kilometers from the Line of Control (LoC). 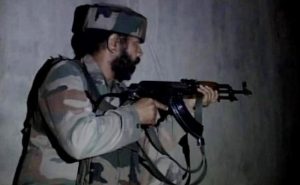 The eyewitnesses described the viewing a gutted building across the Al-Haawi bridge from the hamlet’s main bazaar, where a military boundary post and a compound practiced by the Lashkar were observed, as per the report. Al-Haawi bridge is the endpoint where infiltrating groups are loaded with supplies before starting their climb up to the LoC towards Kupwara in Jammu and Kashmir.

Eyewitnesses also added that they heard a powerful explosion but did not come out to see. They said that around five to six bodies were packed on the truck early next morning and probably transported to the nearest Lashkar camp at Chalhana.

Another eyewitness quoted that the Friday prayers at a Lashkar-affiliated mosque in Chalhana concluded with a cleric swearing to retaliate the deaths of men killed in Surgical strike. The Lashkar men also accused the Pakistan Army for failing to safeguard the international border.

As per the reports, the number of losses was lower than the total of 38-40 associated to officials is some reports.

Leepa, a group of approx 25 hamlets situated at the bottom of the Qazi Nag stream moving down from the mountains above Naugam, on the Indian side of the LoC, was amongst the “launch-pads” targeted in the surgical strikes. He said he talked to villagers who witnessed the Lashkar-occupied, three-storied wooden building slaughtered by Indian army near the village of Khairati Bagh.

The eyewitness also added that “three-four” Lashkar operatives were deemed to have been killed, while others escaped into the bordering forests. Sounds of Fire and explosions were also heard from the east bank of the Neelum river in Athmuqam, the district headquarters of the sector.

The strike, as per the report, seemed to have conducted near military camps along the Katha Nar stream that drains into the Neelum river. A bustling hamlet that assists as a hub for tourism and commerce, Athmuqam is also a main military hub. The ghost villages of Bicchwal and Bugna, almost entirely abandoned. An eyewitness who visited the Neelum District Hospital in Athmuqam stated that he had heard about the killing of several Lashkar personnel in the surgical strike but also stated that no bodies had been buried nearby.