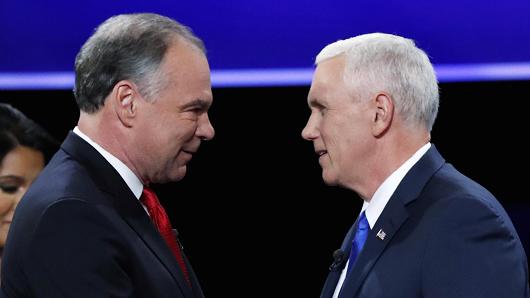 Donald Trump’s VP candidate Mike Pence is jobbed with venturing to reverse one of Trump’s worst polling weeks after attending a huge loss to Hillary Clinton in their first debate, and will try to drive the agenda for ‘change’ against the establishment.

Meanwhile, Clinton’s VP candidate, Tim Kaine is assumed to gain the momentum of the first Presidential debate and keep his sharp eye on Trump’s unreleased tax returns, his record of  behaviour, and possibly hit on points of ideological difference between Pence and Trump.

“I am interested to hear whether he’ll defend his running mate’s not releasing taxes and not paying taxes,”  Tim Kaine

Mike Pence said “His tax returns showed he went through a very difficult time, but he used the tax code just the way it’s supposed to be used. And he did it brilliantly.”

“How do you know that? You haven’t seen his tax returns,” Kaine asked interrupting his vice presidential rival.

Pence also added “Trump has brought an extraordinary business acumen. He’s employed tens of thousands of people in the US,”

Pence said “Those tax returns that were – that came out publicly this week show that he faced some pretty tough times 20 years ago. But like virtually every other business, including the New York Times not too long ago, he used what’s called net operating loss. We have a tax code, Senator, that actually is designed to encourage entrepreneurship in this country,” he asserted.

“He created a runway – because he’s created a business that’s worth billions of dollars today,” Pence added.

“How do you know that?” Kaine asked.

Pence said Trump has not broken his promises.

“Senator, do you take all the deductions that you’re entitled to?” the Governor asked.

Pence alleged that at a time of great challenge in the life of this nation, “where we’ve weakened America’s place in the world, stifled America’s economy,” the campaign of Hillary Clinton and Kaine has been an avalanche of insults.

Under Clinton’s leadership, Kaine claimed, she was part of the national team, public safety team that went after and revived the dormant hunt against bin Laden and wiped him off the face of the Earth.

“She worked to deal with the Russians to reduce their chemical weapons stockpile. She worked a tough negotiation with nations around the world to eliminate the Iranian nuclear weapons program without firing a shot,” he asserted.

In a blistering drive on Donald Trump, Kaine played the ‘fascist’ card, capitalising on Trump’s alleged financial relations with Russia and Putin.

He also gave a summary of his ticket’s strategy to defeat ISIS: “Hillary Clinton’s plan to defeat ISIS: Take out leaders, disrupt financing networks, disrupt ability to recruit on the internet and safe havens, work with allies to share intelligence.” he said.

Pence hit the blame for ISIS at the current administration’s bar,  appropriate on Clinton’s role in facilitating its rise. “ISIS was conjured up out of the desert and was able to overrun areas that American forces had control of.”